An American Flag Fashioned out of 30,000 Bullets! 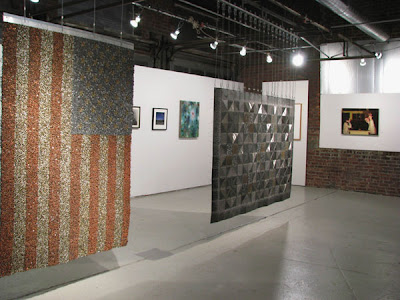 It took artist Berta Leone, who was trained in metal sculpture at the University of South Florida, almost two years to produce this amazing sculpture, an American flag fashioned entirely out of bullets "sewn" together. The flag measures four by six feet.

There are approximately 30,000 bullets in the sculpture, which is called “E Pluribus Unum,” -- “Out of Many, One.” 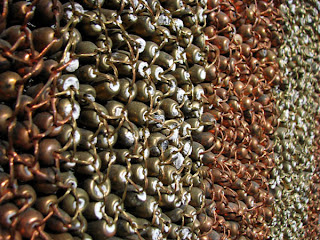 Leone retrieved the spent copper and lead bullets from a local shooting range near her former home in Tampa. "They were fired by a cross-section of fellow Americans," she says.

On her website, Leone explains that she “sorted, drilled, and finally hand-stitched together” the bullets with wire. Leone began work in November 1999 and completed the sculpture in 2001, quite appropriately, on the Fourth of July. "The bullets are seductive -- they sparkle like gems. Since they are used, the surface is somewhat dulled, smashed and blackened by the gunpowder.”
Posted by Claudia R at Friday, October 22, 2010