Buddhism Can't Be This Bad, Can It? 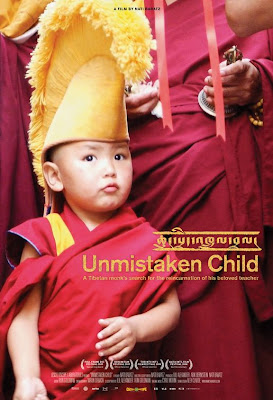 I think it's important to start by saying that I've been meditating for at least 10 or 12 years, every single morning. It's also important to note that I am fascinated by the discoveries being made about the mental powers of Buddhist monks (see for example Sharon Begley's fine book, Train Your Mind, Change Your Brain.)

If you mention the Dalai Lama's name to me, or Buddhism in general, I generally react very positively.

Which makes it all the more difficult to confront what I'm feeling about the new documentary, "Unmistaken Child." What I am about to write might make a lot of people mad. Before you get mad, see this movie, by young Israeli director Nati Baratz, who had extraordinary access as he filmed for five and a half years (taking 200 hours of film!)

This real-time documentary follows a Buddhist monk's search for a reincarnated form of his master, Lama Konchog, who spent 26 years in isolated meditation in a mountain cave. Apparently, Lama Konchog was regarded as one of the greatest Tibetan Masters of our times.

In 2001, after Lama Konchog's death at the age of 84, his devoted follower, Tenzin Zopa, is absolutely heartbroken. He is instructed by the Dalai Lama to search for the reincarnated version of the Lama.

The search takes young Tenzin Zopa into the mountainous wilds of Nepal, where he follows tips from a Chinese astrologist, who among other devices, uses a kind of Etch a Sketch to divine where the reincarnated child will be born.

Ultimately the monk finds a child in a remote valley. The first clue that this chubby-cheeked boy is the reincarnation of the deceased Lama comes when the child is willfully attached to the crystal rosary beads that had been used by the Lama.

There are more tests, all of which the child passes with flying colors (to me, honestly, the child seems prompted during the tests.)

The child is taken from his parents (with their permission, but of course, they've been pressured in so many subtle and not-so-subtle ways.) The pain in their faces is heart-wrenching.

But the story is disturbing for other reasons. I never realized before seeing this film how much "god worship" there is in Buddhism, the gods being little humans who are chosen reincarnates (and of course there is plenty of worship of the older Lamas.)

In a scene toward the end of the film, the little boy, now outfitted in full vermillion Buddhist garb, his round little head shaved clean, is standing beside the Dalai Lama. A gazillion folks are in a mass worship ceremony, and they begin filing up for blessing. The baby is touching each of their heads and occasionally throwing a white silk scarf over their necks. Folks present him with little gifts, like cars and airplanes, and in between the blessings, he plays with the toys.

To me, it was a dreadful thing. In the eyes of these masses, I saw the sort of adulation that I recall from my Catholic upbringing, the kind I thought was reserved for the Vatican and the Pope.

I thought the point of Buddhism was the elimination of ego. I thought the commitment was to here and now enlightenment through meditation. I never realized the level of fanaticism of some of the monks, the obsession they have to find the reincarnated form of Lama "egos" that have passed away.

So, I would say, see the movie. See what you think.

If you do, pay special attention to the very last scene, where the monk and the young boy are sitting very close to one another, laughing and playing. To me the scene (I won't tell you what they are playing with) suggests something quite sinister about the relationship between the 30ish-year old monk, and the 3 or 4-ish year old boy.

I hope it's just me.

I did not see any mention of this scene in any other reviews. I did not read about anyone asking the director what he might have been suggesting by ending there. Maybe it's just me, and my paranoia, paranoia that comes from reading way too much about the behavior of priests who have access to beautiful little boys.
Posted by Claudia R at Monday, July 13, 2009

Hi friend, peace...
Your post very interesting.
If you willing visit my blog, and read my post at http://sosiologidakwah.blogspot.com
And... if you love books, read The Holy Qur'an please...

I love your blog and wish I could get to it more often. This piece and the NPR piece are eye openers. They force me to deal with issues and feelings. It is the kind of growth I experienced in your literature class. Thanks so much for being here and doing this exceptional work. I know it is time consuming.
Barbara who will have to figure out how to stop posting anonymously--yet MORE growth:-)

We Westerners tend to think that Buddhism (and Islam, for that matter) are monolithic religions that don't have the denominational differences that Judaism and Christianity have.

Check it out: there are a number of schools of Buddhism, not all of which include veneration of a living human being. Take Zen Buddhism for example.

Tibetan Buddhism (or tantric Buddhism as it is also called) contains vestiges of its Hindu pre-cursor, which may be the origin of the practice which your post decries.

Unfortunately there are quite a few aspects of the Tibetan tradition that have as much in common with Buddhism as Santeria does with Catholicism.

Of course, one shouldn't paint Tibetan Buddhism as a whole with a single a brush, but you might wish to read the following article by Michael Nenonen: