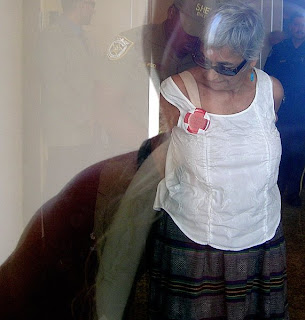 Once upon a time in America, people would say: "Sometimes I have to stand up and be counted." That was in the past.

But a few days ago, I had a glimpse of the past. So did this woman in Florida. 70 and cuffed, Patty Bender was among a group of Floridians arrested outside the corporate offices of Humana in West Palm Beach, Florida.

The wild-eyed radicals who demonstrated across the country were mostly senior citizens and mostly middle class, except for some like Leslie Elder who lost all insurance when her cancer recurred twice. Elder now risks losing her home because of medical bills. (That''s the way a majority of Americans go bankrupt these days.)

In West Palm, protester Patti Bender was up against eight police cars, 20 sheriff's officers, plus two paramedics and one growling police dog. A lot of power to face down that 75-year old lady.

So what did she do that made police arrest her?

All she did was respectfully submit a letter at Humana's door. The letter asked merely one thing: allow treatment prescribed by a physician for life-threatened Humana patients. The company refused. So a few gentle people sat down at the door until they got a better answer.

The group Health Care Now, which praises the protesters' actions, says: "Nonviolent action is a worldwide tradition based on an understanding that in a society power flows not from guns or positions of authority but from the consent and cooperation of the people."

Martin Luther King said: “Of all the forms of inequality, injustice in health care is the most shocking and inhumane.”

The first sheriff's officer who moved toward and prepared to handcuff the gentle old folk sitting peacefully on the lobby floor glowered and said: "All criminals." 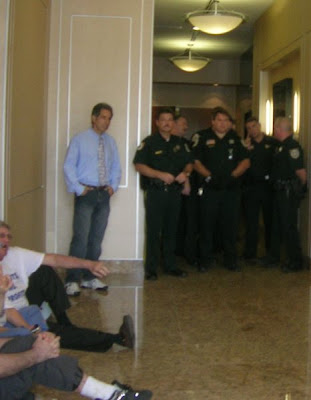 "I"m doing this for my daughter," said James Elder. "She's 27 and if we don't fix health insurance now, it could ruin her life later."

I wish I could personally thank these people for actually trying to do something about this mess.

It seems odd to me that there was such a quick and large police response. Police organizations are always saying they cannot spend time enforcing laws such as selling cigarettes to children or finding those who are in arrears for child support payments because they are understaffed. Yet, here they are, responding with a grossly over-sized force when a large corporation wants something done.

Thanks for the post. Two minor corrections, it's Patty, not Patti, Bender and she's actually just a fresh-faced younster who only hit 70 last year.