Portrait of a Couple 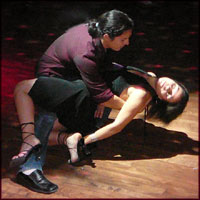 By Camincha
I see them dancing. Where did they go wrong?
Was it because they turned too quickly?
Was it because they danced too fast?
She learned though. And survived him by not dwelling on the past.
And when the memories kept intruding, the years of hunger,
recriminations, the hatred. Yes, the hatred. The hope. Yes, the hope.
The love. Yes, the love. She thought only of the dancing they did
in those years before he made his last journey. Before he went
into that last number. Before he took his last step.


She's sure he knew. She's sure he remembered too,
many times, years later, El Mambo, Perez Prado Aaaaaaaaaccc.
The Cha Cha Cha
Ay! que rico Cha Cha Cha.
They danced it in that Bar Lounge in San Francisco.
A Peruvian band was in San Francisco, friends called to tell them.
They got a babysitter. Changed, The Little Black Dress
for her with the white buttons. The opened shirt for him
with slacks and sport jacket. Put gas in the car. An extra dollar,
it went far then. And they were off. And danced. And he played the
maracas and the palitos.

And the women warming the plastic covers looked up begging him
with their eyes to dance with them. He obliged. Ever the dancer,
ever the charmer. And when he walked them back to their
plastic covered seats, they were all aglow. Rouged cheeks all the
more prominent, and lips as moist as the behinds they sat on.

He was also a body builder when body building hadn't even been invented.
So good, at so many things.  Why wasn't it in him then, to be a husband,
a father? Was it because his own hunger gnawing at him was more
powerful than his children's? And had to be fed, every moment of every day
so he couldn't feed anyone else morally, emotionally, physically?
There is no going back now. I see you as you were then.
The young, much too young, good looking couple full of promises.

I see them dancing. Where did they go wrong?
Was it because they turned too quickly?
Was it because they danced too fast?
Camincha, a writer living in California, is from Miraflores, Lima, Perú. She calls the United States her second home and keeps close to her roots for she feels that “it is much easier to get where you want to go when you are proud of where you come from.” She earned her MA in Spanish Literature at San Francisco State University.
Posted by Claudia R at Wednesday, September 29, 2010

Beautifully written. I've watched this kind of relationship and always wonder how one can tolerate a lifetime of taking care of someone like this. I still don't get it.