So, anybody can be a journalist today, right? 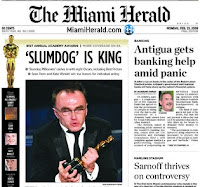 Well, it depends on what you mean by "journalist."

There actually are very specific skills and talents that one needs in order to practise the profession, and hopefully, there is also a set of ethical principles that should guide a journalist's behavior.

Miami Herald columnist Leonard Pitts Jr. thinks the idea of citizen journalism (i.e., the notion that any citizen can be a journalist) stinks.

He points to the so-called "journalist" James O'Keefe III, who is (in)famous for helping to bring down the national community organization ACORN, one of the most effective progressive organizations in the U.S. The group, now defunct thanks in part to O'Keefe's "investigative journalism," once organized on social justice issues mostly in communities of color.

Pitts has plenty to say about O'Keefe's style of journalism. Quoting from his column,

"... I remain convinced that, with exceptions, citizen journalism is to journalism as pornography is to a Martin Scorsese film; while they may employ similar tools -- i.e., camera, lighting -- they aspire to different results."

And then, weigh in right here on the debate over citizen journalism. The New York Times has started to dabble in the idea that anybody can be a journalist. Recall the post here a few weeks ago about the Times' new experiment with a hyper local news organization based in the East Village? It's called The Local East Village and it's making news out of, well, happenings in the local East Village.

Will people read it?

Will it be "journalism"? Does celebrity gossip (and sitings) count as journalism? Why or why not?

All of this brings us right back to the question, what do we mean when we say "journalism" ?

Last year, while on sabbatical at Georgetown, I taught a journalism class in the grad school called "Journalism Upside Down." One of the most intriguing aspects of the class -- one that haunted us all semester -- was coming to some common agreement on what journalism is today, in this era when traditional news organizations are withering, and blogs and websites and social media are blossoming.

So what do you think about this idea of citizen journalism? We would love to hear your views!
Posted by Claudia R at Thursday, October 07, 2010

Some of it is writing posted incorrectly posted as journalism. Sometimes it is poorly written but still clearly journalism. Citizen journalism is, at times, well-written and meaningful.

The question is this. With the abysmally low reading levels of the majority of our young people, will they even notice or care?

Dear Anonymous, you raise an EXCELLENT point. The future is our young people and young people (i.e. my students) are telling me more and more often they don't like to read (some think they don't need to, what with movies and You Tube and whatever.) I think it's quite clear that many young people might not as you say, "even notice or care"! THANKS SO MUCH! Claudia