Why the Republicans are so Intent on Killing Health Care 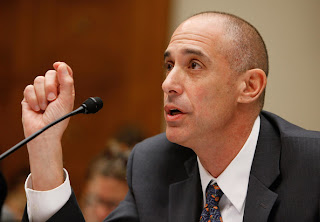 By Richard Kirsch
Why are Republicans John Boehner, Eric Cantor and Mitch McConnell so intent on stopping health care reform from ever taking hold? For the same reason that Republicans and the corporate Right spent more than $200 million in the last year to demonize health care in swing Congressional districts. It wasn’t just about trying to stop the bill from becoming law or taking over Congress. It is because health reform, if it takes hold, will create a bond between the American people and government, just as Social Security and Medicare have done. Democrats, and all those who believe that government has a positive place in our lives, should remember how much is at stake as Republicans and corporate elites try to use their electoral victory to dismantle the new health care law.
My enjoyment of the MLB playoffs last month was interrupted by ads run by Karl Rove’s Crossroads front group against upstate New York Rep. Scott Murphy, who was defeated last Tuesday. Rove’s ads rained accusations on Murphy, including the charge of a “government takeover of health care.” Some might have thought that once the public option was removed from the health care legislation, Republicans couldn’t make that charge. But it was never tied to the public option or any other specific reform. Republicans and their allies, following the advice of message guru Frank Luntz, were going to call whatever Democrats proposed a government takeover.
There’s nothing new here. Throughout American history, health care reform has been attacked as socialist. An editorial published in the Journal of the American Medical Association in December 1932, just after FDR’s election, claimed that proposals for compulsory insurance “were socialism and communism — inciting to revolution.” The PR firm that the American Medical Association hired to fight Truman’s push for national health insurance succeeded in popularizing a completely concocted quote that it attributed to Vladimir Lenin: “Socialized medicine is the keystone to the arch of the Socialist State.”
In 1961, Ronald Reagan made an LP recording for an AMA front group called Operation Coffeecup entitled “Ronald Reagan speaks out against SOCIALIZED MEDICINE,” in which the future President says that Medicare will be the foot in the door to a totalitarian takeover. Almost half a century later, Sarah Palin quoted Reagan’s words during her speech accepting the Republican nomination for Vice-President.
Sign up for weekly ND20 highlights, mind-blowing stats, event alerts, and reading/film/music recs. 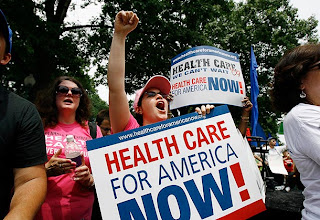 The famous “Harry and Louise” ads that helped sink the Clinton health plan railed against “new mandatory government health alliances run by tens of thousands of new bureaucrats” and concluded “if we let the government choose, we lose.”
The Right has always understood how high the American view of the role of government would be lifted if people came to rely on government for something as essential to a person’s well-being as health care. This year, the animus that the Right maintains toward the New Deal and Great Society programs and philosophy — Social Security, Medicare, the constitution allowing the federal public to regulate commerce — has become visible in the Tea Party movement. The last thing that the corporate and ideological Right want is for health care to be a new pillar added to the foundation of government social insurance.
While Republicans are wrong to call the Affordable Care Act a government takeover of health care, they understand more than many critics on the Left that the new law does profoundly change the relationship between Americans and the government and health care. The heart of the law is a government promise that health coverage will be affordable to almost all Americans, through expanding Medicaid to the poor, providing subsidies for private insurance to working and middle class families, or placing responsibility on medium and large employers to help pay for coverage for their employees. If the ACA is fully implemented, Americans will come to see they will no longer have to worry about going bankrupt, or being locked into a job, or going untreated for serious illness. And they will see that government, and Democrats, did that.
Now that Republicans control the House, they will do everything in their power to delay, defund and disrupt implementation of the Affordable Care Act. They will be assisted in that by another huge wave of advertising and Astroturf lobbying funded by groups like Rove’s Crossroads, which will now have to spend as much on lobbying as they spent on political ads in order to maintain the tax status that allows them to operate in the dark, without disclosing donors.
President Obama and Democrats in Congress understood the historical importance and profound moral underpinnings of the new health care law when they enacted it earlier this year. And they knew that the right-wing attack had soured the public in swing Congressional districts and states on reform. They stood up then. They will have to stand up again, understanding that if they give way to Republicans, they lose more than the expansion of health coverage. They lose the best opportunity in half a century to prove to Americans that government can be a force for the common good.
Richard Kirsch, formerly campaign manager for Health Care for America Now, is currently a Senior Fellow at the Roosevelt Institute and is writing a book on the progressive campaign to enact health reform. This post ran originally in New Deal 2.0, a blog of the Roosevelt Institute.
Posted by Claudia R at Wednesday, November 10, 2010

Unfortunately this information was not used in campaigning--not one word of what you have written was in a single Murphy ad or any other democrat's ad for that matter. I might well have been swayed to vote for Murphy despite the disappoint when he voted against the first health bill.

As it was, he and other Democrats were so busy trying to play to the middle to the right of the road people, they lost those of us who had originally gone to their rallies, made phone call for them, trekked from door-to-door for them, voted for them.

You can't use the, "big money was on their side" excuse here. I saw a million Scott Murphy ads. I certainly got way too many intrusive phone calls and pieces of expensively printed literature left at my door and in my mailbox from all the democrats. I never heard the message you have here in any of it.