OBAMA SPEAKS, NOW I'M LOOKING FOR A RALLY TO GO TO 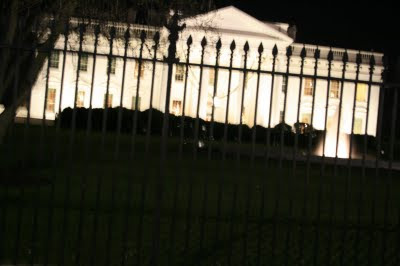 It's been more than a year since I sat up and really listened to something that the President of the United States was saying. It's been at least that long since something President Obama has said moved me in any way or made me particularly proud that he's the Guy in Charge.

But Friday evening when he spoke to reporters after talks on the debt ceiling agreement fell apart -- because the rockhead Republicans refused to move off their position on raising taxes -- something happened. For a few minutes, I felt like I was watching the Obama of the old days, when he was campaigning, when he could muster an electrical response in audiences with his supreme rhetorical gifts. In those old days, Obama seemed to have what it takes to bring the country together to move forward.

Now of course the love affair is long since over and it's not clear the President has the audacity of hope or the political talent or willpower to propel us out of a first-class mess.The past few weeks have brought into sharp focus the desperate political and economic straights that we face as a nation. With Republicans unable as the President pointed out "to say yes to anything," and the right-wing Tea Party crowd willing to see the country go up in smoke to prove some kind of ideological (did I say idiot-logical?) point, we are fabulously stuck. And it's frightening.

What impressed me Friday evening was the fact that Obama looked and sounded authentically pissed off. He was angry in part that he had been "willing to take a lot of heat from my party" to call for cuts in entitlement programs. Indeed, he totally infuriated Democrats with his willingness to cave into right-wing demands for cuts in Medicaid and Medicare, government programs that serve the poor and the middle class.

But even as he showed this flexibility (some would say weakness,) the Republicans led by Majority Leader John Boehner still refused to compromise. They refused to consider raising taxes to help close the deficit. Without tax increases, Obama pointed out, "the entire thing ends up being tilted on the backs of the poor and middle-class families." That is, we squeeze the people most in need for the money.

It was when he laid this out, and when he made this point rather elegantly in his press briefing, that I found myself sitting up and paying attention. It was when Obama stood up and spoke out on behalf of working families and seniors -- for the American middle class -- that I said, finally! Thank you Mr. President. This is what I wanted to hear:

"The hard part is actually dealing with the underlying debt and deficits, and doing it in a way that’s fair. That’s all the American people are looking for — some fairness. I can’t tell you how many letters and emails I get, including from Republican voters, who say, look, we know that neither party is blameless when it comes to how this deft and deficit developed — there’s been a lot of blame to spread around — but we sure hope you don’t just balance the budget on the backs of seniors. We sure hope that we’re not slashing our commitment to make sure kids can go to college. We sure hope that we’re not suddenly throwing a bunch of poor kids off the Medicaid rolls so they can’t get basic preventative services that keep them out of the emergency room. That’s all they’re looking for, is some fairness."

As someone who teaches in a university program that serves hundreds and hundreds of poor kids who come from inner city neighborhoods, I know a lot about how much government services mean. I know that most of my students wouldn't be where they are today, going to college to get ahead, if they hadn't had these vital services. I know how much their lives have depended on Medicaid and food stamps and welfare checks. I know how much these students continue to depend on government loans in order to stay in college. I know that without all of these government programs, these same students might very well end up going nowhere. 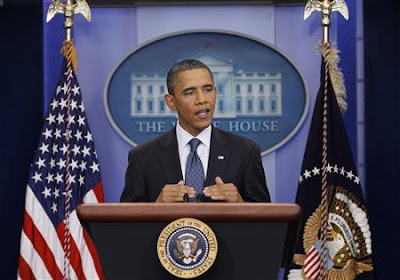 So when the President stood before reporters in the White House on Friday and said that legislators have a moral duty to protect ordinary people -- those "working stiffs" he hears from in the bundles of mail that come to him daily -- I found my heart beating a little bit faster.

"It turns out, actually, that the plan that Speaker Boehner and I were talking about was comparable in terms of deficit reduction. The difference was that we didn’t put all the burden on the people who are least able to protect themselves, who don’t have lobbyists in this town, who don’t have lawyers working on the tax code for them — working stiffs out there, ordinary folks who are struggling every day. And they know they’re getting a raw deal, and they’re mad at everybody about it. They’re mad at Democrats and they’re mad at Republicans, because they know somehow, no matter how hard they work, they don’t seem to be able to keep up. And what they’re looking for is somebody who’s willing to look out for them. That’s all they’re looking for."

He concluded the briefing by saying something very important: "At some point, I think if you want to be a leader, then you've got to lead."

By this point, I was standing in front of the the TV. I turned to my husband and said, "I swear, if there was a march somewhere tomorrow to support Obama's position on this debt ceiling deficit reduction mess, I would go."