Would You Climb a 693-foot Bridge to Band Peregine Falcons?

Note to readers: Barbara Allen Loucks, a biologist who lives in the Albany area, works as a raptor specialist for the New York State Department of Environmental Conservation. She is also a frequent writer of essays. Her article, "On the Edge: the Perils and Rewards of Banding Peregrine Falcons," is the cover story this month in the New York State Conservationist magazine.

Here is an excerpt from Louck's article: 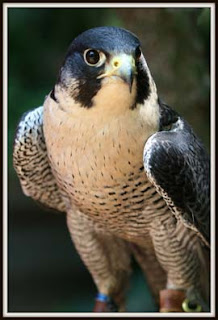 I wasn't expecting the blow to the back of my head. The adult female peregrine falcon took advantage of my back being turned and hit me hard in my helmet with her feet. I was entering the doorway going inside the top of the Kodak Tower in downtown Rochester, and had to stop for an instant, momentarily dizzy. We had just finished putting her young back in the nest box after banding, and she was demonstrating her displeasure at our intrusion.

Peregrine falcons are notoriously aggressive around their eyries (or nest sites) during the breeding season, and the longtime resident female here had a reputation for being particularly unfriendly at our annual visits. As "wing man" for my colleague Mike Allen, I protected his shoulders and back with a broom and served as a target while he grabbed the young out of the nest box.

We both wore eye protection. As an added precaution, another person stood behind me, trying to defend me from the swiftly diving adult female which would suddenly disappear and reappear, "kakking" loudly at times. We worked quickly to bring the young inside the building, and returned them to the waiting adults about a half hour later. Fortunately, adult males rarely attack, so we didn't have to ward him off as well.

Not too long ago, there wasn't a single peregrine pair nesting in New York State. The thinning of eggshells caused by DDT residues in their largely avian prey had eliminated this amazing raptor as a breeding bird from the entire east coast by the early 1960s. But through the release of captive-bred birds from The Peregrine Fund, active restoration programs were successful in reestablishing breeding populations (see "Back from the Brink" in the April 2005 Conservationist). In fact, in 2010, of 76 territorial peregrine pairs in New York, 54 successfully raised 144 young -- the largest population in the eastern U.S.!

Biologists banded 75 of these young. Since the species started nesting in the state again in 1983, hundreds of peregrine falcon chicks have been banded. I am fortunate to be part of a small group of DEC biologists who bands peregrines from New York City to Buffalo. The banding enables us to gather information -- such as mortality (how, when and where they die), movements, dispersal and longevity -- about the population.

The vast majority of young peregrines are banded in the southeastern part of the state, particularly the New York City area. Christopher Nadareski of the New York City Department of Environmental Protection is a key cooperator with DEC. Sometimes, we get lucky and an adult female will refuse to leave the nest box. When this happens, we take the opportunity to capture and band her as well.

Keep reading Loucks' article at the Conservationist on-line site, where the piece on peregrine falcon banding can be in its entirety.
Posted by Claudia R at Sunday, May 06, 2012