Two Inaugurals, Two Messages: This One a Clear, Progressive Vision 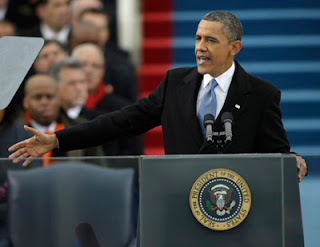 Four years ago, I stood in the cold listening to President Obama’s first inaugural address. I remember it leaving me cold. This year, in the warmth of my den, the president’s clear projection of progressive values as core American values warmed my heart.

I just looked back at Obama’s first inaugural address to see why I found it so disappointing. The speech starts by acknowledging the crisis of 2008, with the economy collapsing and war raging. As required, the president says that America is up to the challenge. The address includes a short list of progressive points on the economy, climate change, and the role of government. But these are interspersed with acknowledgments of the validity of conservative arguments. There is no unifying, values-based narrative or vision.

What a difference from yesterday's address, which starts with the promise of the Declaration of Independence – we are created equal in the pursuit of life, liberty and happiness – and then unabashedly extends that to the struggle for civil rights, which Obama has often shied away from being seen as championing. He grounds our 200-year history “through blood drawn by lash, and blood drawn by sword," reminding us that "no union…could survive half-slave, and half-free.”

From there, the president charges directly to the historic role of government in building our physical and human capital. And unlike four years ago – when he first trumpeted the role of free markets and then noted the need for regulation – he says unambiguously, “Together, we discovered that a free market only thrives when there are rules to ensure competition and fair play” and that “a great nation must care for the vulnerable and protect people from life’s worst hazards and misfortunes.”

Even when the president recognizes values shared by progressives and conservatives – skepticism that about central authority and the importance of initiative and personal responsibility – he quickly affirms that “preserving our individual freedoms ultimately requires collective action.” To meet the future, the president says, will take the kind of things government does – educate children, invest in infrastructure – declaring, “Now more than ever, we must do these things together, as one nation and one people.”
From there he makes it clear that our economic success is undermined when “a few do very well and growing many barely make it.” Instead, "America’s prosperity must rest upon the broad shoulders of a rising middle class. We know that America thrives when every person can find independence and pride in their work, when the wages of honest labor will liberate families from the brink of hardship.”
Obama then begins to build a bridge linking the dignity of the individual with the collective, which he expands as his address progresses. The first span of the bridge is to connect the prospects of a “little girl born into the bleakest poverty” with freedom and equality “not just in the eyes of God, but also in our own.” He continues to build the bridge, insisting that in updating government programs, we should aim to “reward the effort and determination of every single American.” He then makes it clear that this includes keeping the “commitments we make to each other through Medicare and Medicaid and Social Security,” which “strengthen us” and “do not make us a nation of takers. They free us to take the risks that make this nation great.”
The president then puts forth a values-based linkage of government's role in tackling climate change, refuting climate deniers and linking addressing climate change to our “economic vitality” and natural “national treasure.”
Reaching to a preacher’s eloquence, the president affirms that he is not leaving anyone behind in our national journey. The cadences of “our mothers and daughters can earn a living equal to their efforts," “our gay brothers and sisters are treated like anyone else under the law,” “no citizen is forced to wait for hours to exercise the right to vote,” “immigrants who still see America as a land of opportunity,” and “children from the streets of Detroit to the hills of Appalachia to the quiet lanes of Newtown” resound with the voice and spirit of Dr. King. The president has built a bridge that links individual initiative and responsibility to oneself and each other with a values-driven role of government that unites our diversity on the American journey.
Progressives need to pay close attention to another bridge Barack Obama has built here. He has integrated often separate strains: identity politics and the politics of government playing a key role in building an economy based on equal opportunity. The more we link those, the more we will create a story about America that commands a lasting majority.
No progressive story of America would be complete without putting movement at its core, which the president does forcefully in his alliterative embracing of “Seneca Falls and Selma and Stonewall.” Notably, these reminders come at the end of his discussion of our role in the world, as he links American movements to Dr. King’s proclamation that our individual freedom is inextricably bound to the freedom of every soul on earth.
He doesn’t leave the call for action in the past. His concluding paragraphs clarify that “You and I, as citizens, have the power to set this country’s course.”
The president will need lots of help setting that course over the next four years; surely he’ll be tested to keep to it himself. Our job is to do everything we can to assist him.
Richard Kirsch is a Senior Fellow at the Roosevelt Institute, a Senior Adviser to USAction, and the author of Fighting for Our Health. He was National Campaign Manager of Health Care for America Now during the legislative battle to pass reform. This piece appeared first on Next New Deal, the Roosevelt Institute's blog.