I've been painting for 14 years. Now and then, people ask me where they can see my work. So I decided to design a website for the paintings and invite you to take a look:

I have no formal training in art. The way I came to painting was via my first novel, Dreaming Maples. The story features several women who are passionate about their art. Young Candace is devoted to her painting. In order to write about Candace, I spent a lot of time at the Clark Art Institute in Williamstown. The climactic scene in the book takes 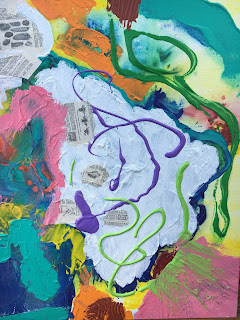 place at the Clark, beneath Renoir's "Blonde Bather."

The way I write fiction, I "SEE" every scene before I can write it. Many people say that when they read my books they feel as though they are watching a movie. So as I wrote, I kept seeing and seeing. Some of what I saw were paintings. Some of what I wrote was about painting. My journals from that period are filled with drawings and small pastels and paintings.

Two months after the book was published, in 2002, I was diagnosed with Hodgkin's Disease. The chemo was ruthless. I could barely function. I wrote poetry to get me through. But I also started to wander around the house in a chemo-induced fog, cutting out pieces of paper and making colorful  collages. 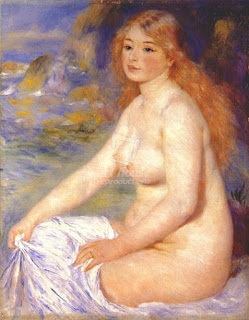 One week, when I was headed to Sloan Kettering, my dear friend Leslie Gabosh, who at the time owned an art store, handed me a fistful of colored pencils and a small art pad. She picked a Black-eyed Susan growing outside the door and she told me I should draw while waiting for my chemo at Sloan.  I did. It helped so much. Art cured and healed my soul just as the chemo and radiation healed my body.

At some point during that summer of chemo, I painted my first large canvas. 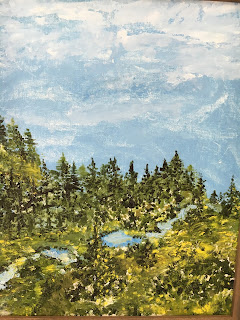 I remember standing beside our beautiful pond, surrounded by the green lush of summer. My painting: a hillside of fir trees against a beautiful blue sky.  The painting was OK, but I quickly realized that I didn't have much talent as a realistic painter.

So I started throwing paint on the canvas, the way Jason Pollock used to. (By the way, I have taken a workshop or two, and one teacher compared my paintings to those by Joan Mitchell.)

I continued to paint outdoors beside the pond. Whenever a painting wasn't working, I would simply hose it down and start again. Over and over and over, I tried to let the PAINT AND THE DESIGN HAVE THEIR SAY.  My goal always was to just STAY OUT OF THE WAY!

That was 2002. I have been throwing acrylic paint on canvas ever since. What have I learned? That painting is alive. More alive than writing. AS VIBRANT AS DIVINE LIGHT!

You write a story or a novel, and it is made of paper (or now, it's an ebook.) But one sits on a bookshelf and the other resides in your iPad.  Paintings on the other hand are lively and pulsing. The colors heat up your soul. When you are done, you can hang them, store them in the basement or give them to your family and friends. I think of people who have my paintings and I smile at each one. PAINTING IS SO MUCH FUN!

At one point, my son Noah, who was living in New York, had so many of my paintings in his apartment that I used to joke that I had a very special gallery in Brooklyn :)

So that's the story, or at least, that's all I need to say right now.

Some great stuff, Claudia. So you know the work of Paul Resika?