OK OK remember my Poco turning into a lovesick teenager?

Well, that little canine connection (with dog Burt) has led to some mighty interesting developments.

That darling little mild-mannered Havenese used to be so quiet, so shy, so lady like, so un-Alpha dog.

She and Burt now police my neighbor Nancy's fenced-in front yard like two military police dogs! A child comes riding down the dead end street on a bike and the two of them jump into action, racing like bullets over to the chained in fence, running up and down the length of it until the child disappears. 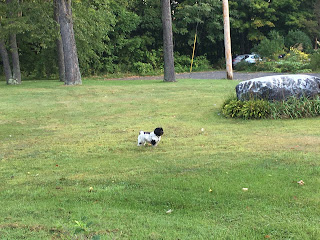 Any little action at the fence or in the other neighbors' yards, and Burt and Poco go into wild yelps, and you have never seen a faster dog than my Poco.

And another thing. There is a nice neighbor named Sven, who has a mean little Shih tzu named Mitzi, a tiny terror whose bark used to send Poco jumping directly into my arms, whining and crying, a scared little sissy.

Running around with Burt, my baby has found her voice. Literally! 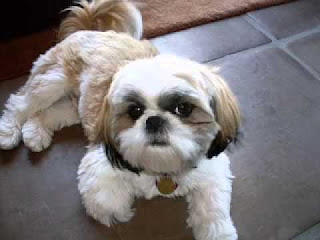 arrived, snarling and carrying on as she does, Poco bolted down the stairs and barked nose to nose, sending the little terror back! No more shy and retiring little lady like doggy.

It  used to be that Poco would quietly sit with me on the back deck to meditate. 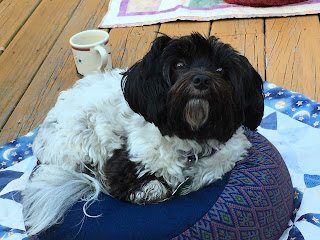 All summer we had the same routine. I would set up my meditation pillow, and she would sit on her pillow, and we would seek enlightenment together.

This morning things went from calm and serene to chaotic and screeching.

There was a young man walking quietly to school (which is around the corner) and she exploded off the meditation pillow and ran to the front yard and went crazy barking at the boy.

"Poco," I yelled, very un-meditatively, "get back here right NOW."

She refused.  I finally caught up to her in the front lawn -- wearing my slippers and yellow bathrobe -- and scooped her up, brought her back to the deck and tried once again to achieve meditative bliss.

No sooner had I sunk into something of a calm mood than she exploded once more, this time at some bird or other disturbance I couldn't identify. Once again she went tearing around to the front yard, and once again I had to chase her down in my bathrobe and slippers.

From now on, I will leave her in the house to meditate, so she can contemplate her new personality -- as a MIGHTY MEDITATING MILITARY POLICE DOG.
Posted by Claudia R at Wednesday, September 14, 2016