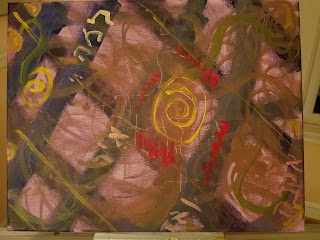 This was my first true abstract painting.  I had just gotten very upsetting news.  My wife Ellen and I talked about it, but I was still steaming.  As it happened, I had my easel up and paint out.

Meanwhile, I had recently been to the National Gallery of Art.  On the way to see paintings by Wayne Thiebaud, we passed through a room that featured mainly Jackson Pollock's work.

So I just started painting, laying the pinkish-purple, whatever paint there was there, on the canvas – without a plan. I alternated between the blandness of the background and the boldness of the stripes (which some see as prison bars, though I don’t.)  Hard, angular strokes contrasted with rounded shapes and lines.

Since my anger had to do with action I didn’t understand by a loved one, I put in a question mark, then more, in odd directions.  Since I’m Jewish, I started inserting Hebrew letters that, together, follow a discussion with myself.

Stepping back, I saw that, as I often do, I’d used a palette without adequate contrast.  So I started layering in the brighter colors.

I finished the painting in one session, about an hour and a half. At that point, I followed the advice I recalled from my teachers: “Know when to stop.” 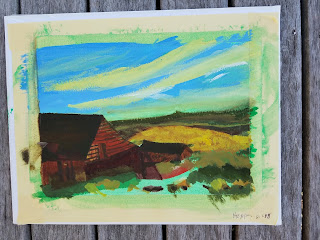 I started painting the summer after I retired from a 37-year career.  Nothing had been farther from my interests or expectations than painting.  My mother, then 92, didn’t really believe in “being taken care of" by her children, but I wanted to spend more time with her.  So I asked her to teach me how to paint, a hobby of hers as a young woman. She took up painting again more than 50 years later, in her 80’s.

That summer of 2013, we started painting together while on vacation in Truro, on Cape Cod.  Our house there is not far from Edward Hopper’s, the place where he painted some beautiful land-and-seascapes.

So he’s been an inspiration.

After being too intimidated to try watercolor – it seemed so unforgiving as a medium – I took a class. That led to multiple watercolors – the teacher suggested that you keep four or five going simultaneously, so you can work on one while another dries.

I found a book of Hopper's work and decided to practice my new watercolor interest by working from it.  The first choice was a painting of a barn that is less than a mile from our house, if it still stands.

Amazingly, it’s one that hangs in the Oval Office of former President Obama!

I also took a class on “abstract representation,” from teacher Megan Hinton, a painter I admire greatly. She pushed us not to be so damn stuck on trying to reproduce what we saw; instead she encouraged us to try to  capture the spirit of a scene, to experiment with it.

So there I was, trying to work from Hopper’s barn but not be bound by it.  I love his pale sky – at sunrise? -- in the original, contrasted with the dark barn.  But I also like the energy of my sky, even though it’s not really a color the sky gets to be (this is partly a result of not being patient enough at mixing colors and skillful enough to capture the way a sky fades from one color to the other; I'm working on that).  It too, I think, contrasts with the dark barn well.

In the gently rising and falling hill, grass, etc. I wonder about the very modest changes within the brown grass of the hillside and the blocky, bright-and-dark greens of the meadow or lawn.

The curving red of the dirt in front of the barn seems unnatural to me.  But maybe it’s a reasonable way to capture the abstract quality of that part of the painting.