God Works in Strange Ways, OR, John McCain, Maybe You Can Put the Screws to McConnell's Health Care Plan?

Ah, but for a little -- or not so little -- blood clot behind Senator McCain's eye, we might be seeing the godawful Republicans voting this week to pass their truly evil health care plan.

One would hope that Senator McCain will 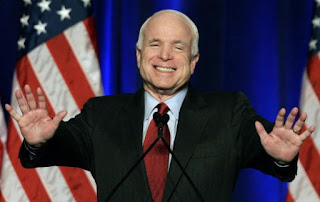 emerge from this difficult surgery (and we send our sympathy), restored to health AND ready to do the right thing. Maybe, just maybe he will decide to stand up to that pouch-faced 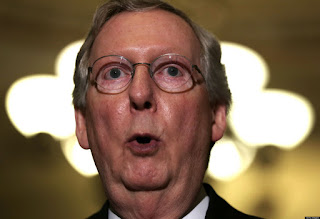 Mitch McConnell and tell him to take the Republican bill and shove it up where it belongs.

When I heard about McCain's problem, and how it would delay the vote, I thought to myself (yes, with some glee) gee, what happens if the recovery isn't just a week or two, but perhaps three or four weeks or more? What then?

So imagine my surprise today when The New York Times reported that McCain's recovery from the eye surgery he had -- called a craniotomy -- may not be a speedy as first though. A doctor at the Albert Einstein College of Medicine in New York City is of the opinion that "the recovery time from a craniotomy is usually a few weeks."


OK, as I was saying, what happens if McCain screws up McConnell's plans? What if McConnell and his henchmen are kept from ramming their plan down our throats -- a plan that will wreak havoc on Medicaid, take health insurance away from more than 20 million Americans and otherwise screw up our health care system more than it's already screwed up.

When I asked my husband Richard Kirsch -- a progressive activist who was key in helping to pass Obamacare in 2010 -- what would happen if McCain can't return to DC for several weeks, the first thing he did was laugh. Then he threw up his hands and offered these thoughts:

"The question is what happens to the rest of their agenda. Unless he can come back by mid-August, it will push the health care vote past Labor Day. Which is good news because the longer the delay, the more time there is for people to organize opposition and the less popular the plan will become."

Ah, but what a delight it would be to see McConnell and Ted Cruz and all the rest of them twist in the wind.

Does the future of health care rest -- improbably -- on a tiny clot in one man's left eye?

Could the eye problem, such a small incision, be some kind of divine intervention? As they say, eyes are the windows on the soul.

There are many ways to look at this situation, and I invite others to explain it in more rational lawmaker terms.

But as I wish Senator McCain a speedy recovery, I also take this opportunity to say another prayer that there is justice somewhere in the universe, or at least, occasionally in Washington, D.C!