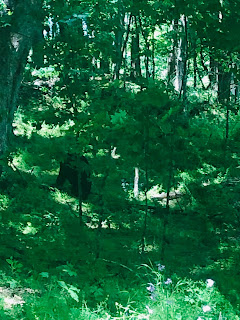 Yesterday afternoon, a large black bear lumbered up my driveway. I had just come in from a walk with my dog. Now I was headed to town. As soon as I saw the bear I shut the car off and fumbled for my camera. He (or she) gamboled toward me, its furry body looking rubbery as it ran. The bear veered into the woods and my photo was a small black blob far off in the thick greenery.
I remember a bear sighting that was a lot more frightening. It was the summer of 1996 and my literary agent (who was representing my first novel) had come up from Manhattan to visit me in the country.
She was afraid to leave the porch all weekend because she said she didn’t want to encounter any frogs or bugs or snakes.
But on Sunday morning, she made this rather odd request: she wanted to go for a walk in the woods. So two of my children (one on a bike) and Ellie and I drove to a trailhead nearby. We headed into the forest. We had walked about a quarter of a mile down a fire road when suddenly I saw a very large black head poking out from between the trees. I stopped.
“Ellie,” I whispered, “I don’t want you to panic, but there is a bear over there.”
Did she squeal? I don’t recall. All I remember is that everything turned slow motion. Oddly, a car came driving up the fire road right at that moment. How improbable that a car would appear when it did.
I waved down the driver and told her we had just seen a bear and could she drive us back to our car. Ellie and my children piled into the back seat.
And then I did something that I’ve never been able to explain: I got on my daughter’s bike and pedaled down the fire road after the car. It wasn’t like I was feeling particularly brave. I just did it.
The bear of course had long since disappeared into the woods.
When we got back to the house, Ellie collapsed on the sofa and didn’t move for the rest of the day.
Later, when the rejections on the novel started coming in from the big New York publishers, and Ellie and I were so frustrated and disappointed, I thought back to the bear encounter. It occurred to me that maybe the bear sighting had been a sign of what was to come.
Selling my book was truly a bear of an experience.
Here I am so many years later, facing some difficult family problems – my aging father is on the decline, my sister is struggling to recover from a very serious stroke.
This week has been particularly challenging. Yes. It’s been a bear of a week.
And so that creature appeared again. When I frame the experience this way, it helps. The events don’t weigh quite so heavily. Bears help us to know first hand the power of the natural world. They help define events that are bigger than we are. They show us circumstances we are powerless to control.
When I think about the bear in this way, and when I picture the animal lurking in the dark green forest, it puts me in touch with the raw fear that I’ve been feeling about my dad and my sister.
That’s good because I’ve been reluctant to get in touch with the fear. Or the vast sadness that accompanies the fear.
Framed this way, the bear sighting is a gift. Getting scared is OK. Better to feel it than to run away. Better to accept the fact that bears come. And then they go away.
At least for today, I stare into the forest and force myself to stay there, feeling the dark power of the bear.
Posted by Claudia R at Thursday, June 13, 2019