It's Friday November 6, 2020 and 50 degrees and the sky is bright blue and sunny, so Leah is once again doing her yoga outside on her purple mat. The iris is just a few feet away. 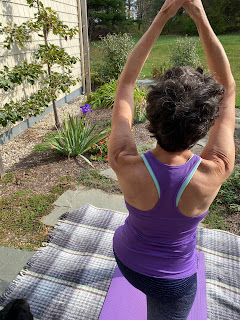 Leah breathes and stretches her arms overhead, stretching one arm up and then the other. Then she kneels on the mat and raises her arms in a steeple pose.

Today makes exactly nine months almost to the day that Leah first walked outside onto the frozen lawn. This book has had the gestation period of a human baby.

Here now it is November and the lawn is still green and unfrozen but all of the trees and shrubs and flowers and plants, with the exception of 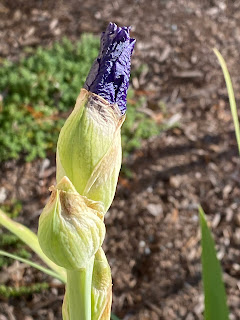 Everything else is brown and crispy.

About an hour ago, wearing her blue bathrobe, Leah had just finished meditating.

She started writing in  her journal about light.

At that moment, suddenly and with no explanation, the flashlight in her iPhone turned on. She couldn't turn it off. 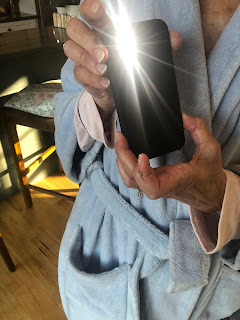 Leah smiles. She isn't shocked anymore when these littles miracles might happen. She is accepting and grateful.

Her cousin Donna Ricci sent her more information about her Grandfather, ANGEL-o Ricci, and his family. His mother, Augusta Baldini: 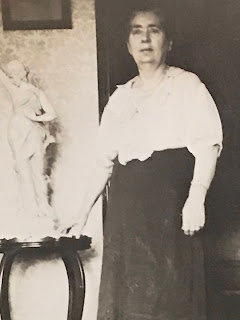 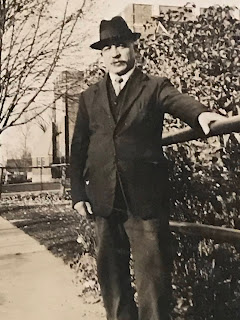 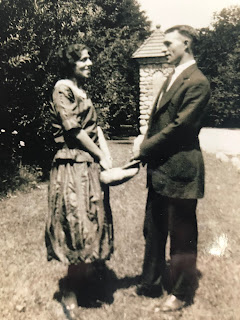 Here are GRANDPA ANGEL-o and his wife, GRANDMA ALBINA ORZO when they were courting.

ANGEL-o's daughter, Elizabeth (Bette) Ann Foeller, nee Ricci, who lives in Illinois, interviewed Grandpa ANGEL-o in 1988, and learned that he emigrated to the United States from Priverno, Italy on

EXACTLY TO THE DAY,

ANGEL-o's parents, Augusta and Giovanni, were poor when they first came to this country.

"Angelo and his father, Giovanni Ricci, took a train from Priverno, Italia, to Viterbo, changed trains and went on to Naples. In the Port of Naples they boarded the "Princess Irene," a two-stack steamship, which was a German line with an Italian crew.

"The ship stopped in Palermo, Sicily, to pick up more passengers. They had third class tickets, "steerage passage." The food was bad with no choices; they carried their own utensils, slept on a bunk in a large dormitory, sanitation and comfort were poor."

"As an immigrant, Giovanni had a job with the New York Central Railroad as a forger in Maybrook, N.Y. His skills working with metals in Italy, where he made and sold cooking pots, were advantageous. Giovanni also grew artichokes when in Italy, which is a crop that brought a high market price. But years of bad weather ruined him financially."

"His wife, Augusta (nee Baldini), owned and operated a grocery store in Priverno. She and other family members emigrated separately. Angelo tells of his brother Freddie, who would hide on a shelf under the counter of his mother's store so he could snitch some cheese or other goodies."

"In the United States, Angelo worked alongside his father as a waterway. One summer he worked as a houseboy for a wealthy businessman, emptying chamber pots and generally helping the domestic workers and family."

"He and his father finally settled in Bristol, Connecticut. Angelo for many years worked for Ingraham & Company, the local clock factory. He rose to the position of shop foreman."

"He courted the love of his life, Albina Orzo, with her sister Mary, chaperoning often at Rockwell Park in Bristol where they would row boats on the Park lake. He would serenade his sweetheart and play the mandolin.

AGAINST THE WISHES OF HIS MOTHER, AUGUSTA,

"He married Albina Orzo on October 12, 1921 (he was 20, she was 18). They married in the rectory of Saint Anthony's Church. They had five children, Robert, Richard, Catherine, Paul and Elizabeth."

What my aunt doesn't mention is that GRANDPA ANGEL-o WAS AN EXTRAORDINARY GARDENER. HIS VEGETABLES WERE EXQUISITE. HIS ROSES DIVINE. AND HIS IRISES

What Aunt Bette doesn't write is that none of Albina's grandchildren ever heard a word about her in-laws, 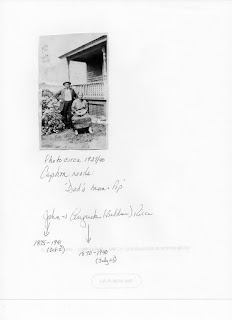 It was as if GRANDPA ANGEL-o HAD NO FAMILY AT ALL!

As Leah writes this history, she feels a deep dark cavernous emptiness in her chest. She feels anxiety and she realizes it's all because of the very sad story she just wrote.

When she tells her spiritual therapist about Augusta denying her son, GRANDPA ANGEL-o,

So was the bad feeling that Augusta had for her daughter in law Albina --ANGEL-o's WIFE-- that Augusta erased herself from her son's life.

ROOT OUT THE DARKNESS FROM HER ANCESTRAL LINE.

She is so so grateful to her cousin Donna Ricci, and her Aunt Bette Foeller for helping her unearth GRANDPA ANGEL-o RICCI'S HISTORY!

As Leah finishes writing, she asks herself,

is this the last family story

In her GREEN JOURNAL NUMBER TWO, 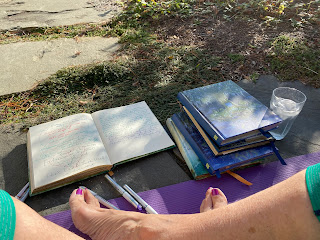 she writes, "AM I FINISHED?"

And she answers: "I will ask that question in meditation. I will wait for an answer!"