"The Loneliest Girl in the World" 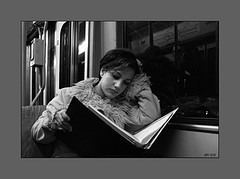 At 5 a.m., a man and a woman entered the same subway car at the Astoria Blvd station, but they did not see each other.

The woman had barely made it, running breathlessly up the two short flights of stairs to the train as the conductor was advising everyone to “stand clear of the closing doors please.” She slid into a seat and plopped her bag onto her lap, relieved that she wasn’t going to be late for work. The man had already taken a seat and watched with amusement as the woman dashed into the car.

They sat on opposite ends of the subway, the only two people in it. They were united by a mutual preference for privacy, an opportunity that many New Yorkers wait for on the subway, but rarely get.

The woman took out a notebook and a pen. She often wrote on the subway as she rode to work, but today she had difficulty concentrating. She was self-conscious, aware of the man sitting nearly a full-car length away from her. It seemed like a long distance, but the emptiness of the car shortened that distance so it was as if he was sitting right next to her.

A Snapple bottle noisily rolled from one end of the car to another, until he finally stopped it with his foot and set it upright under his seat. The man found it strange that he was in the subway car with only one other person. Even at 5 a.m., there were always at least a few sleepy construction workers in paint-splattered jeans cradling cups of coffee. 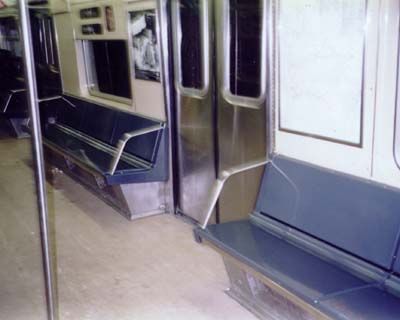 He was a lanky young man with dark, wispy hair and a dancer’s body that still managed to stay thin despite eating at all hours of the night and his predilection for McDonald’s fries. He wasn’t a model, but as a teenager, had been on several covers for those store catalogs you send away for in the mail, like Sears or JCPenney. This morning, he was running downtown to a friend’s studio.
This woman, the woman that was sitting across from him, was completely covered in an oversize winter coat, and he was disappointed that he couldn’t imagine the body that was hidden underneath all those layers. 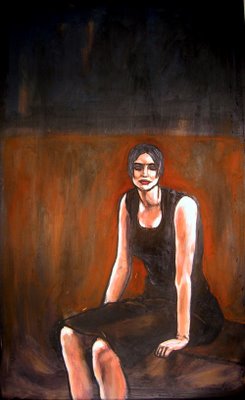 By Irene LewSome of his friends joked that he was perverse and a “sex addict,” but he just enjoyed a woman’s body…sweaty flesh sliding over his, soft, full breasts that he could cup in his hands. When he looked at her, felt no sexual desire at all and this intrigued him. He felt a strange pull towards her, a curiosity about this woman whose head drooped lower and lower onto her notebook, like a ventriloquist’s dummy.

The woman stared at the page in front of her. The page was still blank. She glanced over in his direction, trying to appear as nonchalant as possible. He was good-looking, and one of those men who knew it. His arms were draped casually over the back of the seat and his eyes were focused on a subway ad for a school of philosophy. Suddenly, he turned his head and caught her staring. Shit. Her eyes returned to the page before her, burning. She wanted to be someone else, someone unlike the girl she was used to seeing in the mirror every morning. She wanted to be uninhibited, lusty, confident but not too brazen, sexual and desirable without even trying. She imagined that this was the type of woman he dated. Model-thin leggy blonde with clothes that draped over all the right places. Women who took their beauty for granted and carried it off effortlessly. A sharp pang of loneliness jarred her.

“May I sit here?” The question startled her, and she glanced up, pen hovering above the page. The man loomed over her, leaning against the pole.

To his surprise, she was rather beautiful, the kind of innocent beauty that would’ve gone unnoticed had he not looked for it underneath her waterfall of wavy black hair, delicate fingers peeking from a large coat, calm, brown, almond-shaped eyes that unnerved him as she peered up at him.

“Why are you taking the subway so early?” he asked. 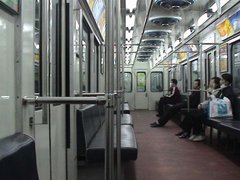 “I’m going to work,” she said, closing her notebook. “I work at the concierge desk in a hotel.”

“Oh I see,” he said. “I’m going downtown to a friend’s recording studio.” The train had just pulled out of Queensboro Plaza and was going underground. The city skyline slowly sank out of view, and they were plunged into darkness.

Silence fell again. She didn’t know what to say to this stranger, didn’t understand why he wanted to talk to her, what he wanted from her. “Do you miss someone?” he blurted out. As soon as he said it, he instantly regretted it.

She was taken aback. “It’s not really someone I miss,” she said slowly. “It’s more like someplace.” And suddenly, she thought of home, thousands of miles away, in California. “And this city…even though there’s so many people in it, sometimes, I feel like the loneliest girl in the world.” She took a deep shuddering breath. 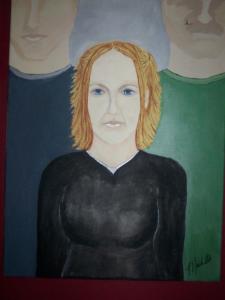 He felt the need to comfort her, a great need, something he had never felt the urge to do before. He wasn’t the consoling, cry-on-my-shoulder type of guy, but the wetness of her eyes unnerved him. At the same time, a part of him understood exactly what she was talking about,

“I think every single damn person in this city feels that way at some point,” he said.

The morning after spending a night with yet another curvy stranger, he rolled over and got out of bed as quietly as he could without disturbing the sleeping figure next to him. He grabbed a lighter and cigarette and padded barefoot outside to his outdoor terrace. It was still dark, and very faint streaks of pink light nudged the rim of the horizon. Leaning against the railing, he surveyed the scene before him. Rows of dilapidated warehouses that had stood abandoned for decades, the shape of the elevated train tracks. He could see the Astoria Blvd. station from his window, and he was reminded again of her-“the loneliest girl in the world.”

Writer Irene Lew graduated from the University at Albany, SUNY, in May of 2006. She is working for a trade publication in New York called “World Screen,” writing about the international television and media industry.
Posted by Claudia R at Sunday, February 04, 2007