A book about Obama you don't want to miss! 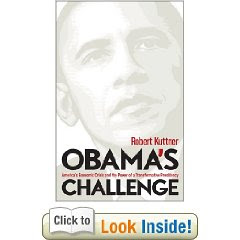 OK, so maybe you are fed up to here with election coverage. Maybe you fell asleep during the debates the other night. Maybe, if you are like me, you cringe at the idea that we have five more weeks to wait before we can walk into the polling place on Tuesday, November 4th, and cast our ballots.

But now comes a book -- short and very well written -- that can rev you up. I found it courtesy of my husband, political activist Richard Kirsch, who happened on it at the Democratic National Convention in Denver. Called Obama's Challenge, the book has given me a view "forward." That is, it's helping me to see how, if Obama is elected, we really might have a U.S. President who can transform history.

Kuttner, a journalist and political observer with three decades experience, refers back to three transformational Presidents: Lincoln, FDR and LBJ. He explains how each man arrived in the White House at a momentous time in history, and how each seized the opportunity to make a real difference in governing. By demonstrating true leadership, and by taking courageous stands, each President redefined what was possible politically -- Lincoln in terms of slavery and abolition, FDR in terms of labor, and LBJ in terms of the civil rights movement.

So now comes Obama. Kuttner, founder of the liberal magazine The American Prospect, suggests that the current economic crisis is arguably "the worst financial collapse since the Great Depression." Bad news, for sure. But that also makes this another moment in history when the time is ripe for unequivically bold and decisive action. The crisis at hand demands bold policies that are above and beyond politics, "bolder measures than either the Congress or Obama himself currently thinks necessary or possible."

What Obama needs to do, Kuttner writes, is demonstrate the same style leadership that the other transformative Presidents displayed, "taking huge political risks on behalf of principles that the people came to deeply respect." Principles like justice and tolerance. To do this, Kuttner says, it isn't enough just to act like one more politician, calculating policies only after studying polls, reviewing the DC circuit gab, and testing pundit opinions.

No, a transformative President has vision (which Obama has shown) and wisdom (which Kuttner says Obama displayed in his first book, Dreams From My Father.) Once elected, Obama has to exert both, taking hold of the Presidency with decisiveness and direction, something we haven't seen from a President in a long while (well, actually, Kuttner says we saw it under Reagan, but Reagan used his transformative powers to achieve right-wing ideological gains.) By contrast, the Democratic Presidents of recent times -- Clinton, most notably -- failed to be transformative because they took the safe, centrist road.

One reason Obama wrested the nomination (against all odds) away from front-runner Hillary Clinton was that she was inextricably linked to the kind of "risk-averse mushy" centrist political positioning that voters are just fed up with. The mush of the center isn't going to take us where we need to go as a nation in these very troubled times.

Will Obama do better? Will he actually serve our nation at this critical juncture? Earlier in this election season, there were indications that like so many politicians before him, Obama was shifting into centrist quagmire. He was taking stances -- on government phone tapping, for one -- that deeply troubled progressives.

But Kuttner is willing to give Obama a break. He's willing to say that maybe Obamaa had to shift center slightly to ensure his nomination.

Once the Democratic nominee becomes the man in the White House, the question is clear: will Obama, as President, rise to the challenge, will he "rehabilitate the constructive role of government, both in the minds of the people and in what government delivers."

These are scary times, for sure. But this is an exciting moment in history. And a time when progressive change may be possible in the way government steers the economy, in the way we as a nation deliver health care, in the way we forge energy policy and reform education. Will Obama stick to his audacious visions and take us where we need to go, or close?

Like Obama's own books, this book is inspiring. It lays out the way one man could really make a difference in the history of our nation, and in the lives of millions of Americans. I salute Mr. Kuttner for a job, well done!
Posted by Claudia R at Sunday, September 28, 2008