Skunks in the Yard 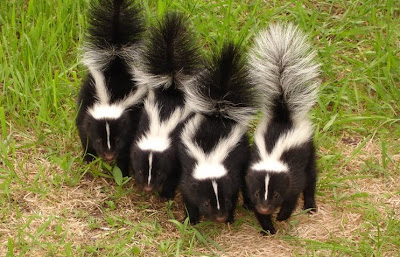 About five summers ago, Alba and Lloyd’s cat, Domino, suddenly changed her ways.

Domino's food had always been kept in the house. Otherwise the skunks, opossums, coyotes and other wild creatures that were known to visit the backyard from time to time would be tempted to help themselves.

But one night, for no reason that Alba could see, Domino started to demand her food dish be brought to the steps outside. She no longer wanted to come in.

Alba kept an eye on the dish. She was ready to bring it in the minute Domino finished eating. Curiously, Alba noticed that the cat didn’t touch her food. Instead, the minute the dish was on the step Domino ran to it, sniffed it and just went back to sitting on her chair. Or so Alba thought.

What was going on? What was this lovely, chubby, black cat that so much resembled a skunk with the wide, white stripe snaking through her from her head to the tip of her tail, what was she up to?

The answer came one evening, when the sun, in a glorious combination of bright reds and oranges, had already set. There was no moon. It was very dark, and so Alba had to strain to see the cat. Was that Domino on the step? Or was that a skunk? Or...were there two of them?

Suddenly in amazement Alba realized that, yes, it was her cat and a skunk. A fat, big one. Domino was showing the skunk where her food dish was. The two creatures stood there, Domino and the skunk side by side. They sniffed each other. Then they kissed each other!

Domino asked for food for the skunk every evening in the same way. The days passed.

Another summer evening with lots of daylight, Alba was at the computer next to the glass sliding doors that open to the backyard with its hill and ample open space. Lloyd came in to talk. He was facing the backyard. All of a sudden he exclaimed: Look! Look!

Alba turned. There was Domino coming down the hill followed closely by a fluffy wobbling black fur ball with white specks. A baby skunk! There was purpose in Domino’s steps. She brought the baby skunk to her food dish on the steps.

Alas, the fluffy ball couldn’t make it up the steps. Inside the room, Alba and Lloyd just watched. They didn’t move. Didn’t want to intrude. What to do? Just watch.

Domino overturned the dish! The food spilled down the steps and all over the ground. The fluffy ball ate voraciously.

From that evening on, Alba fed that baby skunk, its mother, the father that appeared from nowhere, and their four other babies.

That Domino, what a cat. Alba and Lloyd were so proud: Domino knew that skunk was pregnant. And that’s why she wanted to feed her!

Then the raccoons came.


Camincha is a pen name for a Pacifica, California-based writer. She is a frequent contributor to MyStoryLives.
Posted by Claudia R at Wednesday, September 09, 2009