Where Would We Be Without Family? 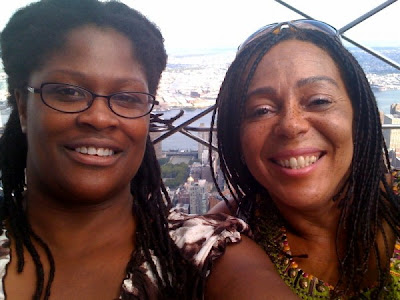 Five days have passed since my cousin, Tracey, returned to Rugby, England.

This morning, I brewed the coffee she’d bought and sat at a round glass table on my deck where each morning for two weeks she had rolled her cigarettes (or fags, as she called them) while watching my cat hunt sticks and ants.

Although it was drizzling, there’s a spot beneath the boughs of a maple tree, where you can sit even in a steady rain without getting wet. Tracey discovered this, not me. Before she came, my deck was rarely used.

I looked through the boughs toward the sky that looked like gray fleece and listened to the day. Early morning cars injected bass and treble sound into what would have been an otherwise quiet time punctuated only by intermittent chirps of waking birds.

In that spot, I thought about the cousin who had come and gone.

When I left England in 1980, Tracey was one of just a handful of cousins and one of only three girls. She was four years older than me, so she was my big cousin. When I visited her family, she took me swimming–one of my favorite things to do. Yet, I didn’t think much of exchanging her or my other relatives for a life in America, where I’d have only my parents and my younger brother. I thought I’d get Disneyland instead.

Until Tracey visited, I didn’t know that she was missing. I had never looked for her, never put out an APB, never placed an ad or hung a lost flyer on a single telephone pole. In fact, I knew right where I’d left her. And I never thought I would see her again.

When she popped up after all these years, as easy for me as 20-minute ride to the airport, it was like finding something you thought you’d lost or hearing an old song that you used to love that the radio had stopped playing–for me, “Summer Days” from Grease, maybe, the first record I had ever owned.

I left England on a fog-filled day in June. Just the month before, I had turned ten, and my parents gave me a silver cross. On the day that we finished packing, I touched my neck as I habitually did, and the necklace wasn’t there. I cried so hard for it, not because it was so expensive or couldn’t be replaced, but simply because it was the first piece of jewelry that I had ever owned.

Years later, when I was packing to go to boarding school, I found the necklace all bent and tarnished in the corner of a suitcase. I thought it had been missing, but it had been there all along. My mother traded my chain for one of hers with a sturdy lock, so that I would never lose it again, and I immediately put it on.

It took a two-week visit from cousin Tracey to force me to step away from the demands of daily life and take a good look at the place I now call home.

Suddenly, after living in the US for 31 years, I became a tourist in my own country.

We visited the usual spots like Lake Placid and went camping for a couple days near Whiteface Mountain. She even had the opportunity to see a bear, which visited our camp -- twice!

The most interesting part of her visit was going to New York City and watching a foreigner take it in for the first time. When we made a list of what she wanted to see, I suggested the usual–Ellis Island, Empire State Building, the World Trade Center site, Times Square.

Her list (and in this order) -- the inside of an American law firm (so she could see if they looked the way they do in American shows on TV), the types of places where "Sex in the City" would take place, the Chrysler Building (apparently this is a must-see as far as the English are concerned) and Times Square.

She did not want to visit the World Trade Center site. She was content to view Lady Liberty from afar, and she was not at all amused by the three-hour time span we spent mostly in lines waiting to get in (and out) of the Empire State Building.

Times Square was to be the big sha-bang, so I saved it until last, the place we would stay until the call of the final train forced us to leave. 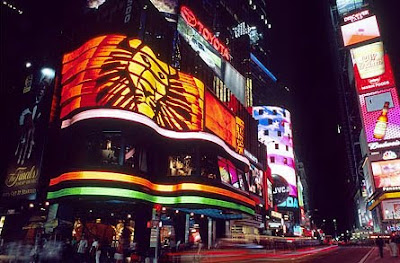 We got there at dusk. Men were sitting about playing chess and people were beginning to come in droves. We walked around, and she took what seemed like a hundred photos. Then, within thirty minutes at the most, she suggested that we go back to one of the nice streets we had been walking on to get a coffee or a drink. What’s next, she wanted to know. What was the plan?

I was dumbfounded. There we were in Times Square. Police on every corner (tourists, for some reason always want to take pictures with American cops -- especially the ones on horses). Broadway lights at every turn, the hum of a night yet to unfold, and she wanted to know what was next.

There is no next, I told her. We’re here, where everyone is going. This is it. Final destination. The big sha-bang.

She looked around, unimpressed.

“Reminds me of Blackpool,” she said. Blackpool is a family resort spot in England.

I didn’t expect that I would feel so defensive. After all, I remember years ago when her mixed reactions to America would have been my own. Back then, I too was totally unimpressed. There’s the undeniable beauty of places like upstate New York and then the oversized, crowded, impoverished, violent, gritty, dirty America. Either way, I guess one has to live here to love it here.

There was a moment of silence, and then there was little left to say. I didn’t feel like showing her my America anymore, so we headed back to Grand Central Station and took the next train home.

Lori Cullen's blog appears regularly on the Albany Times Union's blog page. This material appeared first in the blog on August 2 and 3, 2010. Make sure to check out Cullen's wonderful writing at http://blog.timesunion.com/loricullen/
Posted by Claudia R at Wednesday, August 04, 2010