Shop the Economy Back to Health? Not if You Don't Have a Job! 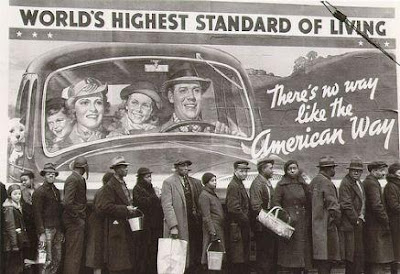 This article appeared first in the Huffington Post at http://www.huffingtonpost.com/claudia-ricci/shop-the-economy-back-to_b_690399.html

I'm no economist and my stint as a reporter at The Wall Street Journal was years back now. But you don't have to be a business expert or a rocket scientist to know when a newspaper byline is total bullshit.

The Washington Post's "NEWS ALERT" came late on Friday afternoon, http://link.email.washingtonpost.com/r/HXJVEI/3OOX2Z/RN0L64/PCNOB9/GPG54/AZ/t
as if something really exciting and unexpected had happened, say, Lady Gaga was contemplating a run for president.

No, this was the News Alert in my gmail:

"CEOs tell The Washington Post why they're not hiring: Democrats say we need more stimulus, and Republicans say we need less regulation and lower taxes. But CEOs say the real problem is that they simply don't trust American consumers will open their wallets in the coming years."

How many workers these days think they are immune from the ax? How many households feel secure enough about the economy and their personal future to part freely with cash? Most of us are nursing our aging washing machines along, even when they sound like trucks running uphill. And maybe the dishwasher isn't doing a perfect job getting the glasses to sparkle, but hey, the stuff comes out more or less clean.

Like most economic issues, this one is complicated but simple. Businesses aren't willing to hire until they are convinced that consumer demand for their products is going to grow at a reliable pace. But consumers won't spend for fear they are going to be fired.

Bob Herbert's recent column in The New York Times laid out the nation's dire employment crisis in the starkest terms http://www.nytimes.com/2010/08/10/opinion/10herbert.html?_r=2&hp along with Washington's pitifully inadequate response: "The politicians' approach to the jobs crisis has been like passing out umbrellas in a hurricane. Millions are suffering and the entire economy is being undermined, and what are they doing? They're appropriating more and more money for warfare while schizophrenically babbling about balancing the budget."

In the past, government has overcome post-recessionary stalemate by stimulating the economy with work programs. We've had some of those build-roads and fix-parks kinds of programs, but the Republicans are staunch in leading the resistance to any more spending in this vein.

Meanwhile, businesses are flush with cash (according to the Post article.) But what will they do with this cash?

Former Labor Secretary Robert Reich in an on-air column on NPR's Marketplace http://marketplace.publicradio.org/display/web/2010/07/28/pm-rise-in-profits-more-hiring-not-exactly/ points out exactly what corporate America is doing: investing abroad, for one thing.

"It used to be the case that when the profits of large American corporations rose, so did their hiring. Not this time. For one thing, many of their profits are coming from overseas. So that's where they're investing and expanding production."

Companies are also using profits to invest in labor-saving technology, which HELLO, means, that they will hire even fewer human laborers down the line.

Oh, and one other thing. Reich says "...corporations are using their pile of money to pay dividends to their shareholders and buy back their own stock -- thereby pushing up share prices."

So it is. Companies care about one thing, enhancing their bottom line. That's how capitalism works.

Fine, except we're in a mind-boggling economic crisis that isn't going away. Americans aren't going back to work in big enough numbers to make the economy come around.

So why should it come as such a news alert surprise that those same unemployed workers aren't running out to Target and Wal-Mart and The Gap to shop the economy back to health?
Posted by Claudia R at Monday, August 23, 2010