An Activist Cheers On the Demonstrators 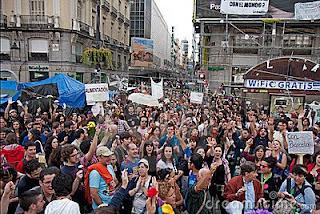 In May and June, I travelled to Spain and Italy. On the day of my arrival in Madrid, I took the metro to Puerta del Sol in the heart of downtown. As I travelled up the escalator, the first view of the city was a crowd of tents.

Two days earlier, el movimiento de 15 de Mayo had begun. Organizing largely by e-mail and cell phone, these student demonstrators were camped out to protest in time for the upcoming elections, but their protest had more than elections in view. Affinity groups huddled in the quiet streets holding teach-ins. The mood of the demonstration was gentle. Boxes for donated food were labeled. People passing by stopped to talk . The signs hung on building expressed a range of hope for the future well beyond employment. My favorite read: We are going slow, because we plan to go far.

I have watched with warmth in my heart as demonstrators have claimed the financial district in New York and recently as Occupy Albany has gathered in Academy Park. For fifteen years, beginning at age 17, I was an activist. I organized countless demonstrations, wrote handbooks, provided trainings in nonviolence and civil disobedience, and designed and created campaigns to promote peace and social justice.

For more than a year, I was a key organizer for the Women’s Encampment for Peace and Justice at the Sececa Army Depot. In these years, I felt deeply part of a tradition. I loved reading about the civil rights movement, Gandhi’s campaigns in India, and the European and American anarchists. Every exercise we used in our non-violence trainings carried with it a deep history from another time. So many of the songs we sang were from the labor movement or from the deep south. We pulled from history, but we were also creating history that grew out of the voice of our time. Responding to the deployment of cruise missiles in Europe or the arming of the Contra in Nicaragua, we created actions that spoke for the change that our world needed in order to claim a peaceful future.

Early in my career as an activist, I was facilitating a non-violence training in Washington D.C. Still a teenager, I was leading a conversation in preparation for a civil disobedience action. Two older people joined our circle – Wally and Juanita Nelson. Right away I knew their faces and their history in the civil rights movement. They were in their eighties – the grandparents of our movement. I could hardly speak. What could I say – that would have any relevance from my position. What they modeled for me that day was a kind of respect that I encountered almost every where I went as a young activist. My ideas were valued; my voice was listened to. My participation was valued. I was handed my place in this powerful tradition of love and creation.

And now I understand. I watch with delight as this new leadership finds its way. Nonviolence is complex and choices are made by consensus. New forms and ways emerge and get tested in the crucible of protest. And from where I sit, I watch with delight – trusting the decisions of this very new worldwide movement and its leadership. Just as Wally and Juanita Nelson trusted me.

The future is in their hands. And joy is in my heart.