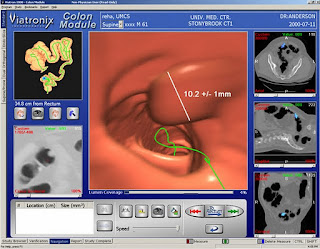 Eventually everyone’s organs begin to fail. Yours will, too, at some point. It’s a fertile marketplace for more tests and treatments. So much so that we now sit in an age when we’re doing better on improving testing than on treatment.

No one pinpoints the parameters—the size, scale and pathology of what’s bothering you inside—like we now do in America. But knowing the very last technical spec about your condition doesn’t cure it. That’s where you and I are today.

Yesterday I went through the last major test required for the biggest surgery of all. The surgery -- a double transplant -- will take 10 hours. The testing has taken five months. Five rather excruciating months!

This new test is better than the old, because it doesn’t require sedation which can be rough on the heart, especially if you’ve already got heart issues. So now they’ve come up with an alternative to the traditional colonoscopy. In keeping with our times, it’s called a “virtual colonoscopy” and relies more on an external CT scan than unappealing internal probes.

If you’re willing, I’d like to take you with me through this procedure. It’s still not pretty, so readers beware:

• First, pick up the products your doctor has prescribed that are going to turn a waste treatment plant—your colon—into a pristine operating theatre in less than two days.

• Thirty-six hours before the test, essentially start fasting. They babble about all the clear liquids you can have. It amounts to a glass of ginger ale. Even red Jell-O is out. We’re talking about serious fasting. Fifty percent longer than Yom Kippur.

• Open the first product, take a simple pill in the box, Wait 1-6 hours for a bowel movement.

• Now get ready to spend all the remaining time before the test within 100 feet of a toilet.

• The minute that happens start drinking this fruit-flavored liquid that also came in the box. But don’t sip casually. Take exactly 8 ounces every 10 minutes until the jug is empty. That’s the full two litres in less than an hour and a half. You start feeling like a porpoise. And for those of us with renal failure this is our limit for 48 hours, not 80 minutes, raising interesting questions no one ever answers.

• Within another hour, the first liquid prepares to complete its journey—out your bum.

• An hour later, you get rid of some more. I went five times. It wasn’t painful or even intolerable, but you start hoping it’ll end before you want to go to bed.

• When morning arrives, something more dreaded comes along. I have to give myself an enema. First one ever. Princess Diana had this done by trained maidens at a spa. I was on the bathroom floor. If my wife didn’t have the compassion to take over, I’d still be there. Over 100ML of this stuff goes up your rectum---and comes back out within 2-5 minutes (the box guarantees it) with the final, definitive bowel movement. It’s like a hand wax at the end of a car wash, just not as pretty.

• Finally, you get to the test. If you’re smart, it’ll be at a major university teaching hospital. This is yet another procedure where sheer volume makes doctors more proficient. Community hospitals sometimes don’t have that volume on all procedures and staff at less well-rated non-teaching hospitals is sometimes not of the same quality.

• In this case the idea is to have a very experienced radiologist looking for any polyps in the colon. These can lead to cancer. Their removal ends the risk. An internist told me that the virtual colonoscopy can scan and identify a tiny polyp, down to a ridiculously small fraction of a microgram, or something. So this test can be one of the surer ways to save your life.

• At the test, you are ushered into an x-ray room, not an operating room, with one of those big CT scanners. It’s that long narrow bed with a huge donut contraption around the head. The one Dr. House puts every patient in every week.

• A tech appears offering false good will. He directs you to undress, right down to the socks and disappears. You put on a flimsy hospital gown that’s wide open everywhere. You feel pretty exposed. Because you are.

• The tech slinks back in. He helps you lay on the scanner on your left side. He’s on your back side and you figure he’s doing something, but don’t know. And don’t really want to.

• They roll you on your back and then roll you on your stomach. When done right the filing part only takes 10-15 minutes. You’re told to squeeze and hold your breath at the same time, stretching your hands over your head. Not easy.
Look, it’s not fun, but it’s not surgery. Plus you get to keep living, because this really is one of the surest defenses against cancer. But for me it was mostly another step in a process that’s been a trek across a desert for five months.

Writer Sandy Prisant, who lives with his wife, Susan, in Florida, is awaiting a kidney and heart transplant. He began writing his series, "The Journey we Take Alone," in March, saying it might be his last writing project.
Posted by Claudia R at Monday, October 31, 2011