Surviving New Year's -- and the Hood of a Car 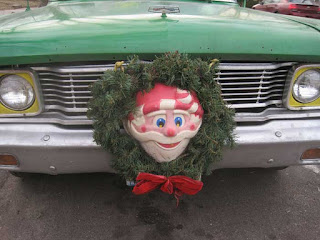 New Year’s is supposed to be a time when family and close friends get together and drink way more alcohol than their bodies can withstand and end up with a crazy story to tell in the morning.

Without one trace of alcohol in our bodies, my maniacal cousins and I still managed to find a way to make an interesting story. It was New Year's 2007 and my family was gathered in my grandmother’s apartment on 139th street in Manhattan.

The apartment was small. Every time another person walked in the door I could have sworn the white walls were caving in on me like some kind of Indiana Jones movie.

The garbage was piled up on the floor like a dumpster. The kids were running around like a bunch of little crazies and the adults were drinking beer in the living room like a bunch of alcoholics. The little hand on the clock had just hit 12:00 am on the dot and the whole family did the usual and unnecessary hugs and handshakes. I remember telling my cousins “this is gonna to be a good year! I feel it!”

Well if you don’t then hearing this next part might come off as a surprise and a “What the f-- was he thinking?” moment.

I was so excited that, like a dumbass, I decided to run out into the street while lifting my shirt up yelling out “2007!!!” like some kind of a psychopath. I remember running down the steps in excitement. The whole world moved in slow motion as I was about to run across the street. As I lifted my shirt I felt the cold breeze pass over my stomach. I felt untouchable, like nothing in this world could stop me…unless it was an eager person driving behind the wheel of a car.

And that’s exactly what stopped me, like an angry wife catching her husband cheating or like a robber being tripped up during his escape. That’s what stopped me. A car!

As I approached the middle of the street a car came crashing into me and lifted me off the ground. As the grill of the car struck the left side of my thigh, my whole body was lifted up by the spirit of God and I was dropped like a sack of potatoes on top of the car.

All I heard was my cousins saying “OH SHIT!” as they stared at me in astonishment.

Miraculously I didn’t get hurt. I When I got up from the car I tried apologizing to the driver, who was now cursing at me like a madman. He drove away, rushing maybe because he was late to his New Year’s party or something. I don’t know and I don’t really care. This was the same guy who had just run me over with his car!

After this catastrophic event, I just dusted myself off and walked normally back to the other side of the block to my cousins, who were now laughing at me. I know…what assholes.

I think that they were just scared shitless and now all they could do was laugh at my stupidity.

I'm sure if the car had hit me and my body had done like 50 flips in the air they wouldn’t have been laughing.

Writer Dilson Hernandez, who grew up in Manhattan, has just completed his first semester in college at the University at Albany, State University of New York.