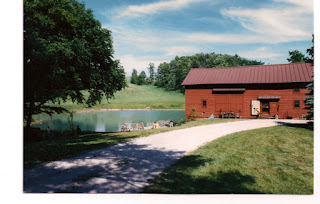 The chicken coop, completely self enclosed,
became Barbara’s art studio.
My desk was in the corner of the
great room, facing the pond.
I looked through the Barn’s eyes at the blue
heron who visited and fished each day and
the bass and carp who tried to avoid his visits.

But it was at night that the Barn,
with its paintings and Navajo rugs
hanging from its walls like necklaces,
became the Grande Dame,
hosting theater events, New Years Eve parties
and my brother’s wedding.

A StageWorks seated dinner gala for eighty-five
with a short play -- the Barn beamed.

“Our Town” -- the table a tableau of Chatham,
white cotton for snow, blue tinsel for ponds,
little houses and the steeple.
The theme bring a story to the table, from your life,
true or false, imagined or unimaginable.
We drank of the wines and poured the stories.

Another Eve, cutouts of the “Clintons” going to
Washington on a wagon, and also on the table
coming out of a cake, surrounded by
fake hotdogs and candy.
The Barn was enjoying its new family and uses. 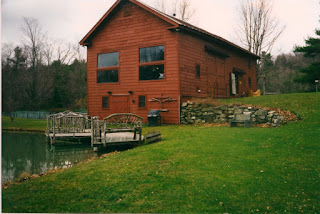 Wedding day for my brother and Judy,
a glorious, spring-summer afternoon.
Not wanting to miss the event,
flowers were opening all around and
peering over their leaves.
Vows were exchanged and then
we went to the Barn.
Its doors were open like welcoming arms.

The great room, where hay wagons once entered,
now had tables and chairs for sixty-five,
an area for dancing and a band in the loft.

The Barn loved the attention and seemed  to
straighten some of the curves of  its sides.

Food was served, wine poured and a mike passed.
Guests rose from chairs to tell their stories.
Laughter and applause resonated in the room,
bouncing off walls – did some originate there?

Then the dancing started.
The music leaps from the loft up to
roof and down to the floor and back.
The Old Barn shakes, its patina
a multicolored dress on this magical night.
Gracefully the Barn absorbs all.

Sure
stars are trying to enter through  windows.

Sure
moonlight is shimmering on the pond.

Sure
lots of wine was had and glasses touched.

Assuredly, even without,
I love these people and our host the Old Barn.

Writer Robert G. Willner lives in Chatham, New York. He has been an attorney and president of a Columbia County drama company called StageWorks. He is the author of "If not now -- when? A MEMOIR IN POEM," published in 2008. Part one of "Old Barn" ran in MyStory on Sunday, June 3, 2012.