This Vigil Deserves Your Support!! 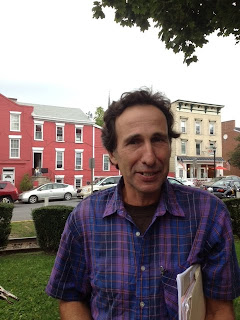 Martin Baumgold
In the wake of 9/11, on Saturday, September 22, 2001, eleven years ago last week, my friend Martin Baumgold decided to stand at the Seventh Street Park in Hudson, New York to demonstrate for peace. The world needed to find peace, and he saw that. He’s been at it since. Every week. Every Saturday. People have come to stand with him, and they have gone away. New ones have come and they too have gone away. Usually, there are 3 or 4 or even 5 people standing at the South side of the Seventh Park on Warren Street. Martin is undeterred, he stands anyway. He’s not the leader of a movement; he just hopes that others will stand with him. But even if they don’t, obviously he’s in it for the long haul.

The message is incredibly simple (these are my words, not anyone else’s): make peace, be peace, live in peace. And for eleven years, Martin has showed up virtually every Saturday at 2 pm to stand up for peace until 4 pm. The time is a measure of his commitment.

A friend of Martin’s realized that today was going to be the eleventh anniversary of the vigil. He put up an invitation on Facebook to an event and invited everyone he could think of. As Saturday came closer, even Martin was taken in. He got a map of the Seventh Street Park, calculated its circumference, and determined that if there were 206 people, they could all hold hands and circle the park. Wouldn’t that be spectacular? Indeed, it would be. It would be monumental.

Earlier in the week the Rotary Club had planted a peace poll in the Seventh Street Park and had a ceremony asking for peace, asking that peace prevail on earth. I am not aware that any of the many people who attended that organized ceremony showed up today to stand with Martin. But the existence of the peace poll right near where Martin stands feels like his vigil has borne fruit.

Today’s demonstration was about 175 people short of the “goal.” No matter. It started to sprinkle. No matter. People stood for peace, they talked with each other, and then they went home. And the vigil will continue. Really it will.

Which brings me to this. This kind of unorganized, leaderless ceremony and demonstration for peace deserves widespread support. So I am directly asking you for it. If I didn’t ask, you wouldn’t know that support was desired.
What kind of support? It’s really simple:

If you’re near Hudson, Columbia County, New York on a Saturday between 2 and 4 pm, please come to the Seventh Street Park and stand with the vigil for peace.

If you’re elsewhere in the world, please let your friends, family, colleagues, acquaintance know about this vigil and that it would be wonderful if they would just drop in some Saturday afternoon. Please forward this and re-post it widely.

That’s it. This is the Internet. My hope is that one Saturday in the not to far distant future, there will actually be 206 people in the Seventh Street Park in Hudson, New York, and that they will be able to hold hands and circle the entire park. That would be a beautiful gesture. It would say to Martin and all of those who stand with him, you are not alone, we agree that peace is important, let there be peace. Make peace, be peace, live in peace.