WRITING OUT OF ANGER -- AND DELIGHT 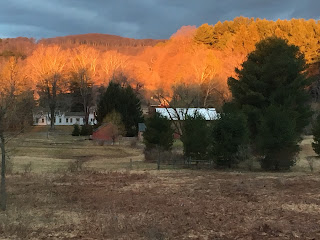 This is the view I woke up to.

I am posting this photo instead of writing the post that I had intended to write.

The post was going to be all of the names that people call HIM.

Then I realized that after I wrote the last post, I felt like I had been wrestling in the mud (or worse.) It took a while to shake the feeling.

Also, a friend and reader of this blog said to me the other day, "that last post, wow, you really have a ton of anger!"

Can I write about what is going on without anger? Should I? Anger is good sometimes, isn't it? Is it healthy to get angry and then stay angry, when HE and his minions are causing so much pain and turmoil in the world? Shouldn't I be writing about how his despicable decisions are going to hurt/kill millions of people?

(Consider for example what happens when people lose their health insurance. Millions will not get the care they need. People with serious illnesses will die.)

I haven't figured out answers to these questions. Until I do, I will (try) not to write about you know who.

I couldn't watch the speech the other night. I know I should have. It's my civic responsibility. But I just couldn't. As my husband watched in the living room, I lay in the bedroom with headphones on, listening to meditation music and reading a fantasy novel.

Recently, a woman I know told me that she was so upset about the vicious political debates swirling and flinging around on Facebook that she signed off the app... for good.

"You're not supposed to read something on Facebook and then feel like you want to jump off a bridge!"

How do you live/think/read/act/feel/write when the world feels like it's mired in...sh.. mud? I wish I could answer these questions.


"Top Republicans said Thursday that Attorney General Jeff Sessions should recuse himself from investigations of whether Russia interfered in the presidential 2016 election at the Justice Department and FBI.
"House Majority Leader Kevin McCarthy said during an appearance on MSNBC Thursday morning that Sessions should bow out to maintain “the trust of the American people.”
"Minutes later, House Oversight and Government Reform committee chairman Jason Chaffetz joined McCarthy’s call, tweeting that “AG Sessions should clarify his testimony and recuse himself.”
"The calls from two of the House’s most prominent Republicans follow revelations that Sessions met with the Russian ambassador during election season. Under oath in front of the Senate Judiciary Committee for his confirmation hearing in January, Sessions had said that he had not met with any Russian officials.
I AM NOT ANGRY, I AM DELIGHTED. So maybe that is how to write.
IN DELIGHT. 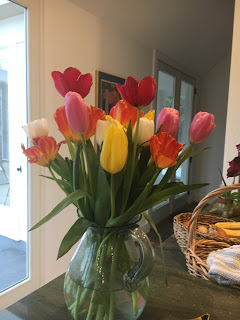