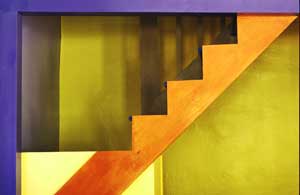 I am convinced the earth is flat. At least I am when I am out running, always preferring level surfaces to bumps and slopes and holes and depressions. I want to sail along smoothly, not labor up some wicked incline with my jaw scraping my knees.

More than anything I detest stairs, even if only a couple steps are involved, and try to avoid them at all costs. Surely, they are among the most hazardous obstacles in the path of a runner, only there to cause him to stumble and fall and injure himself. Time and again, I have slipped on them and twisted an ankle and banged a knee and sprained a wrist, collecting bruises like tattoos all over my body.

I also associate stairs with raspy-voiced coaches who have lost patience with those under their control. "Run'em!" they would scream, referring to the cursed steps in some drafty old gymnasium or stadium. It was a punishment that still resonates in my mind whenever I see a flight of stairs even though it's been a long time since I received such a directive from a coach. 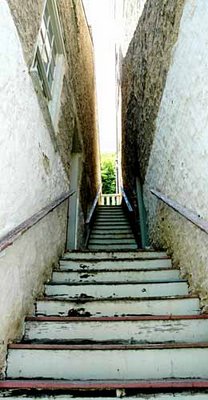 A few years ago in Portland, Oregon a race was held that was reputed to be the highest stair climb competition in the country. It involved two bank towers that together comprised 84 stories, totalling 1,700 steps or approximately 400 meters. The race attracted several hundred participants, many of whom trained for weeks climbing the attic and basement stairs in their homes.

Never had I thought of entering the vertical race before, sure I would rather run naked through a bed of rose stickers. Yet for some inexplicable reason I did, and after considerable hesitation, I signed up on the morning of the event. Of course I told myself it was for a good cause, to assist homeless teenagers, but then nearly all races have some worthwhile objective. More likely, I suspected I wanted to do something I didn't want to do in hopes of overcoming my peculiar apprehension. It was a kind of therapy I reasoned.

Anxiously I stood in a ragged file at the bottom of the stairwell of the first bank tower, behind a mountain of a man whose arms were as thick as fire hydrants. I was sure he would soar up the winding stairs and was a little surprised he was not wearing a cape over his massive shoulders. Old rock songs blared through the lobby and curiously I figured it was only a matter of time before "Stairway to Heaven" began to play. So many of the lean, young, muscular people waiting to storm up the stairs seemed the kind who wanted to go to heaven without having to die.

Half a minute after the guy in front of me was sent up, I followed, abruptly taking two steps at a time. I scrambled up the first story easily, the next even more easily, and thought if I could maintain this pace, I might even catch man-mountain.

Harsh reality soon set in, however. By the eighth floor I was proceeding step by step, and by the eleventh I was grabbing the railing and pulling myself up the cruel stairs. Suddenly I was concerned about developing blisters on my hands, not my feet, I was straining so hard. At one point a short guy so pale he was almost transparent bolted past me and quickly disappeared, making me wonder if he was a ghost.

Occasionally people appeared in the doorways of the different floors, offering encouragement, and I smiled weakly, trying to conceal my fatigue. It was difficult, though. And before long I was cursing each and every blasted step I took, remembering how much I detested stairs.

All I did after I reached the roof of the first tower was cough, furiously, like a three-pack-a-day smoker, trying to recover from the stale air of the stairwell. A bone seemed caught deep in the back of my throat that I could not dislodge. My lungs felt as if they were being squeezed together like an accordion. My head hung limply over the ledge, my eyes barely noticing the smaller surrounding buildings.

Still hacking away, I rode the elevator down and shuttled over to the other tower, and after a few minutes resumed the race, still behind man-mountain who seemed more imposing than ever. Again I felt as if I were breathing through a 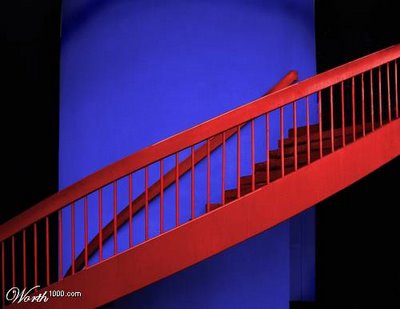 straw. I was almost in a daze as I clawed my way up the narrow red stairwell, scarcely knowing whether to scratch my watch or wind my butt. All I could think about was placing one foot in front of the other so I did not stumble and embarrass myself.

After the race, I hurried out of the lobby and impulsively started running to where my car was parked. "Weren't the stairs enough for you?" another climber shouted as I ran by him. I laughed and continued on, grateful to be back on level ground.

Writer T.R. Healy lives in the Pacific Northwest. His essays have appeared in The Climbing Art, Marathon, and Beyond, among other publications.
Posted by Claudia R at Wednesday, December 27, 2006