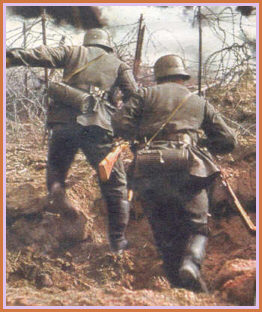 Step around and over fallen comrades.
On the battlefield, it's dusk, the day
is dying slow. The light has had enough.
Everywhere it shines, there's death.

For the sky sure looks like skin, and
the orange is a wound that's pulling
it apart, and the red is blood that
dries itself on the tops of smoky trees.

That sky must have taken a bullet
or two in its time and so that's
why it's bent up, crouching, letting
night get shot at for a while.

But how do you blacken what's already
dark. At least, some stars float out like
ducks in galleries. And the moon is wide
and yellow, saying "Come and get me."

But the army's out of ammunition. Or
everyone's too dead to bother.
So step over or around fallen comrades.
Shadow, it's time for you to leave.

John Grey's latest book is “What Else Is There” from Main Street Rag. He has been published recently in Agni, Hubbub, South Carolina Review and The Journal Of The American Medical Association. Grey lives in Providence, Rhode Island.
Posted by Claudia R at Monday, December 18, 2006