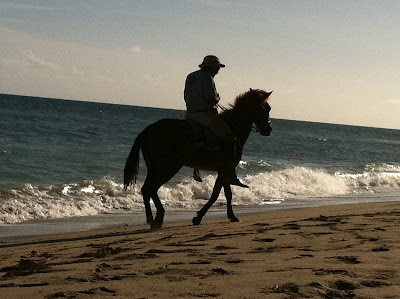 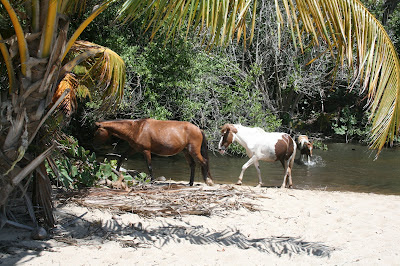 We expected Vieques to have beautiful white sandy beaches, and that emerald green water so characteristic of the Caribbean. We expected plenty of palm trees, and bounties of colorful bougainvillea and other flowers.

But what we hadn't realized is that this beautiful Caribbean island off the coast of Puerto Rico is also home to herds of wild horses, wandering freely all over the island.

Lying on a secluded beach not far from our inn last week, we looked up to see a small herd of horses drinking from a watering 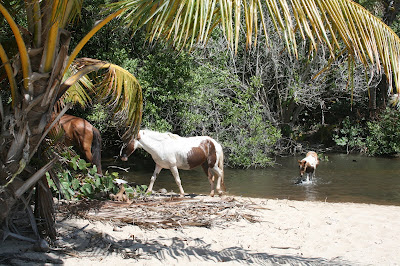 hole a few feet away. They looked to be such gentle animals, although a bit thin; some of their coats looked a tad ragged. But what a marvelous sight to behold.

Driving the narrow roads around the island one also frequently encounters locals riding horses. And sometimes you find residents galloping along the beaches, and then plunging into the green water to cool off! 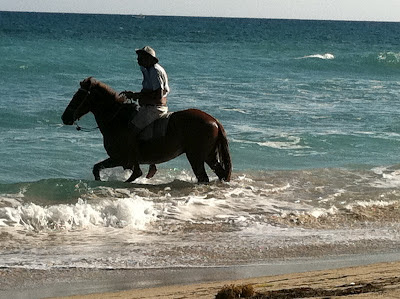 Despite the fact that this island has the look and feel of paradise, Vieques in fact has had a rather tough troubled history, thanks to the U.S. Navy.

For many decades, the Navy used -- or more appropriately abused -- Vieques as its main Atlantic military training site. The Navy performed air, sea and land maneuvers -- including regular bombing -- on some 23,000 acres of the island. 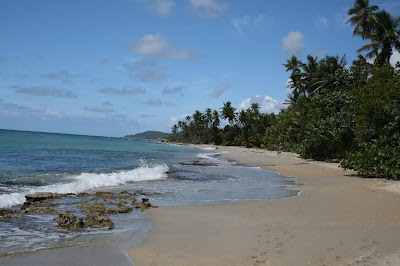 one can only wonder what idiotic people decided it was appropriate to batter such a beautiful natural setting with bombs of all things? Who in their right mind would do such a barbaric thing?

Well, so, thankfully, the Navy FINALLY ceased its military activity in 2003 following years of local protests, and after an errant bomb killed a civilian guard.

Since then, the Navy has set aside millions of dollars to remove military wastes and explosives from the eastern section of the island.

One would hope we learned lessons on Vieques that will never be repeated. 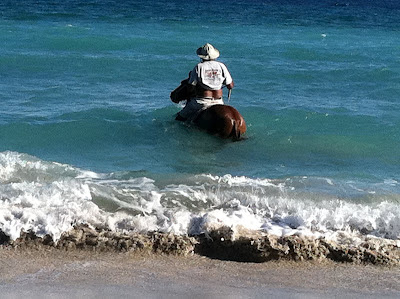 One would hope, but one is not entirely convinced.
Posted by Claudia R at Tuesday, March 20, 2012