A Holiday Movie You Must See!

Chances are, you’ve seen them all, and some of them over and over again.

But now comes along a marvelous Christmas movie you haven’t seen but should.

Called “The Child King,” this feature-length film stars a young man named Peter Johnson, a charismatic actor who happens to have Down Syndrome. The movie isn’t new, but it’s had a limited circulation since it was made in 2007.

Johnson (as Jeremy West) plays the older of two brothers in the film. After the younger brother Jarret (played by Will Kellem) claims that there is no Santa Claus, the older brother steals the family van and the two boys set off on a quest to find the North Pole.  With Johnson at the steering wheel, the boys are aided along their way by none other than Santa himself, who appears in various guises at those moments when the boys are in danger.

The title comes from a fairy tale that Jeremy’s and Jarrett’s mother adored before she died. In that inner tale, a king decides to switch his infant son, who is abnormal, with another baby. The two intertwined stories come together with classic fairy-tale endings.

Filmed on a shoestring, the movie is the work of two brothers, Jeff and Frank Kerr.  Jeff wrote the screenplay and after considerable hounding he convinced brother Frank, a professional filmmaker, to direct and co-produce the film. 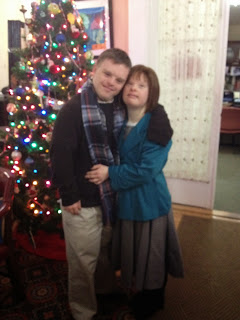 Jeff admits that they were taking a chance casting Johnson in the film’s lead role. But he says he wrote the screenplay after meeting a friend’s young child with Down Syndrome. He was convinced that he wanted the hero of the story be someone with special needs.

At the start, Jeff  -- who dug into his own pocket to make the film -- admits that using an untrained actor in the lead role was a gamble. Both of the Kerr brothers wondered if Peter would remember his lines, take cues and interact appropriately with other actors.
The day that Jeff and Frank visited Peter at his home (he lives with parents Jane and Charlie near Boston) to discuss the movie, Peter “was extremely "shy,” Jeff says. “And a week before filming was set to begin, Peter was in rehearsal and he froze up. Things didn’t look promising.” But lo and behold, when filming began, Peter turned it around. “Now he’s a little movie star,” Jeff says.

For his part, Johnson is proud of the fact that his performance highlights the capabilities of individuals with developmental disabilities.  “It’s a shout out to people with special needs, ” Peter says. My conversation with Peter over coffee last week left no doubt that he can easily turn on the charm and become Mr. Personality.

Apart from the movie, Johnson has a full plate of activities. He attends a day program near his home and has three jobs – one as host at a local Irish pub, the second as a busboy in a Mexican restaurant.  In the third, he works with young kids at the local YMCA. He participates in all of the Special Olympics, and this year he is scheduled to represent Massachusetts in tennis (he’s on the board for the Massachusetts Special Olympics.)

Peter, who is now 26, is also an avid Red Sox fan; he has a photo of him side by side with David Ortiz. He also finds time to deliver inspirational lectures to businesses and other groups in Boston.
Being as busy as he is, it’s understandable that Peter has not had any roles in other movies. But he says he would be delighted to act again.

“The Child King” is available on DVD for purchase at www.TheChildKing.com. All proceeds from sales of the film are donated to a foundation that makes grants to organizations serving people with special needs.

The crowd was hushed as they watched, and afterwards, they thronged around Peter. Several of the women wanted photos with him, and he was more than happy to accommodate the requests.
“All I can say is ‘Wow,” Peter says.

And when I told him that I liked “The Child King” as much as “Home Alone,” Peter was ecstatic. “Home Alone” happens to be one of his all time favorite movies; he watches that and the sequels over and over again.