It's a cold December evening on the Capitol Mall, but several dozen activists are staying warm in a large white tent set up to house the ever-growing number of activists calling for passage of the immigration bill. Dozens of these activists are demonstrating their support by fasting. 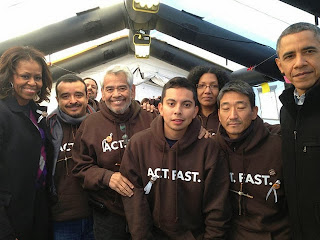 The fasting protest comes in the same week as the world is honoring the spirit and legacy of Nelson Mandela. Protesters say they are emboldened by Mandela's lifelong commitment to human rights.

President and Michelle Obama visited the protesters on Thanksgiving Day to show their support for the fasting vigil.

The target of the immigration protest is legislators in the U. S. House of Representatives, specifically Speaker of the House John Boehner, who is sitting on the immigration bill, refusing to let it come to a vote. The Senate passed their version of the bill earlier this year.

"It's been 28 days, four weeks, and the number of people fasting just keeps growing," says Scott Washburn, an SEIU organizer from Arizona, who is coordinating the evening's activities.  Washburn says that initially there were only five or six people fasting on the mall, but now, the number has grown to 175, some of whom have fasted for 22 or more days.

The protest on the mall culminated on Thursday, December 12th, when activists brought their cause to legislative offices in the Capitol. Meanwhile, groups around the nation will be staging fasting protests in support of the immigration cause. In my legislative district, fasting protests took place in six of Congressman Chris Wilson's offices. I joined protesters on Thursday afternoon in Wilson's Kinderhook, New York office to show my support for the protest.

For more information on the national and local protests, visit the website, Fast4Families.org.

On the Capitol mall, activists gather every night from 6 to 7 p.m. to stoke up the ever-growing focus immigration reform. The fasters - wearing chocolate brown sweatshirts with the words "ACT: FAST" on the front and "FAST FOR FAMILIES" in white letters on the back - are joined by dozens of supporters.

The daily meetings, which build the activists' spirits consist of rousing speeches by local, national and international participants, a review of the fasting efforts as well as slam poetry, syncopated hand clapping, and a concluding prayer.

"There's a spirit here that we really feel," says Washburn. "There's a spirit that draws together all sorts of different people united to call for immigration reform." At one point during the meeting, the group shouts out, "Si se puede," and applauds efforts to reform.

Slam poet and high school teacher Clint Smith performs a piece about the dreamers whose lives and families are torn apart by immigration issues. He gets a standing ovation for a second poem that focuses in on the poverty and frustration experienced by young students in his classroom.

A mother and daughter take the microphone to address the group in Spanish - with a minister translating - saying that undocumented immigrants, many of whom are parents, should not be deported and separated from their children. The daughter holds up a stack of white envelopes containing the pleas of children, begging Boehner and President Obama to pass the immigration bill.

At one point, someone hears that Boehner is attending a meeting nearby the Capitol; three activists head outdoors to see if they can get two minutes of the Speaker's time to plead their cause.

They are successful in finding the Speaker, but he ducked their pleas, driving off in his black SUV, his head down. The activists return to the white tent, triumphant about the fact that  "they spoiled Boehner's evening."

The activists are ever more committed to bringing public support and attention to the immigration cause. Nationwide, there are some 6,000 people fasting as a way of calling on House members to vote on the bill.

After a dozen or more speeches, fasting activity is reviewed. All the fasters sit side by side in the front row and are applauded for their efforts. New fasters are adorned with small crucifixes that are made out of twigs and string.

There is no way you could sit in this tent without being swept up by the spirit of the event.