Here is a farmer you will want to meet!

There are jobs and then there are callings, and farming is definitely the latter.

Take Lisa MacDougall, owner of Mighty Food Farm in Shaftsbury, Vermont. She works 12 strenuous hours a day, seven days a week. She worries endlessly about drought, pests, weeds, frost and disease. She has to get her product to market while it’s still fresh. She has every headache imaginable in running a small business, and she has to shoulder those headaches alone.

But don’t for a minute think she regrets her decision back in 2007 to become a vegetable farmer.

“It’s a dream come true.  I have worked countless hours to get to where I am.  It’s still a lot of hard work and long days, but I try to keep the big picture in mind.”

The big picture just got a lot bigger. After farming 20 acres on two leased parcels in Pownal, Vermont for ten years, MacDougall, with the help of the Vermont Land Trust, bought a gorgeous 155-acre farm last year.

Previously a horse farm, there is still a lot of handsome white fencing on the property. The fields have been well maintained and the barn is in good shape. 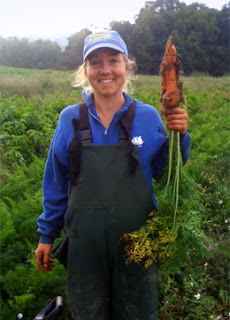 MacDougall, who is 32, was moved to buy a farm because it’s not ideal to rent as a farmer. “You invest so much in the soil that you want to be able to reap those investments and energies.  The old farm in Pownal had very poor infrastructure, an inadequate land base, and my landlord was increasing my rent at an unprecedented rate.”

It was 2011 when she first started to shop for a farm. She offered bids on five other Vermont farms, all of which were rejected.  “It’s hard to find something affordable,” she says. It’s also hard to find the appropriate piece of land.

Standing in the middle of her new spread – flat open farmland on a high plateau with the Green Mountains peeking up at the horizon -- MacDougall is tan and her face is a bit sunburned. She smiles easily. Clearly she has landed in a spot where she and her farm can thrive.

Helping her are eight full-time and two part-time salaried workers (she uses no migrant labor.) Her property includes 90 acres of forest and a beautiful, four-bedroom house as well. 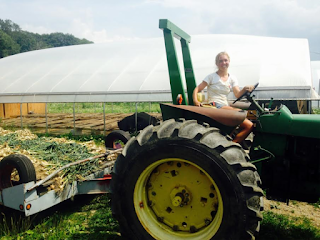 five fewer than in Pownal. She says she was over-producing for many years.  “This past winter I really dug deep into my records, sales, and production to try and pinpoint the right quantities for my markets. I don’t plan on expanding.  My goal is to increase yields and to have a higher net profit out of less acreage.”

Like most 21st century farmers, MacDougall relies heavily on computer technology to aid her in running the farm. “In the winter, I spend a lot of time crunching numbers and producing a lot of spreadsheets.”

MacDougall’s move has created quite a buzz in the Berkshire farming community. “Lisa is remarkable and inspirational," says Barbara Zheutlin, director of Berkshire Grown. "We are always very excited when a farmer like Lisa decides to expand. She is not alone. Her vision and ambition are at the heart of what is going on today in the Berkshires. This is a new generation of farmers inventing farming anew." 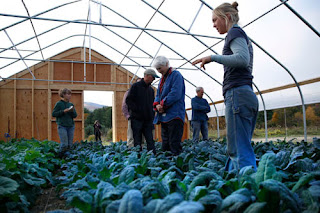 A survey of 142 farmers in this region conducted by Berkshire Grown in January of this year indicates that a majority of farmers responding are interested in expanding their businesses in the next five years.  Berkshire Grown provides support to farmers in a variety of programs aimed at supporting that expansion. These include education and outreach, increased community access to locally grown foods, and networking between farmers and food buyers.

BAV takes a very positive approach to address this challenge: “We say, 'For every barrier in the local food system there is an opportunity for addressing it’ – and we help expand those opportunities and bring more local food to consumers."

Moving a farm to a new location is no small affair. For MacDougall it meant taking apart eight monstrous greenhouses, transporting them to Shaftsbury (she had help from a neighbor), and reassembling them again.

But the biggest challenge, of course, was how she was able to buy the farm. Mighty Food Farm submitted a proposal in a competitive bid process conducted by the Vermont Land Trust, a not-for-profit organization dedicated to making more land available to farmers.

MacDougall was chosen, and VLT raised approximately half the $640,000 cost of the farm. And with the help of the Vermont Economic Development Authority, she mortgaged the remainder. The bottom line is that MacDougall’s monthly mortgage payment is roughly the same as was her monthly rent back in Pownal.

Donald Campbell, of VLT, who worked with MacDougall on the acquisition, has nothing but praise for her as a farmer and a person. He says that MacDougall “made fund-raising easy.”

There were a number of good proposals for the property, many of which VLT would have liked to support. But Lisa’s was by far the best. This was an amazing piece of land and an amazing farmer. It was just a matter of bringing them together.”

Campbell says there were many reasons why MacDougall’s proposal stood out: her education (she was a Plant and Soils major at UMass), her extensive internship experience and her track record. Most importantly ­­– she demonstrated great tenacity.

“This person has worked really, really hard,” Campbell says. “She wasn’t born into” a working farm on an inherited piece of land.

Mighty Food Farm is supported by 200 local customers through the Community Supported Agriculture program -- this is a large number when compared to other CSA farms. MacDougall also supplies vegetables to three farmers’ markets and two Williamstown restaurants.

She has come a long way since she started farming in college. Her first job farming was the summer after her freshman year at UMass. “I fell in love immediately,” she says. She has been working on one or another farm ever since.

A native of Ipswich, Massachusetts, MacDougall’s mother is a psychotherapist and her father works in golf course maintenance. This may explain MacDougall’s love of outdoor work.

And work she does. The dirt is well embedded in her hands and fingernails, and her jeans are a study in mud. When asked if many people are wowed by what she has accomplished as a farmer, she offers a modest reply. “I think people see that I work hard and have respect for that.  I don't take compliments very well.  It makes me kind of uncomfortable.”

One thing that suffers when you are working non-stop is your social life. MacDougall says she took a day off recently to go to a concert. “That was my first day off in three months.”

But this is what happens when your job is your passion is your dream come true. MacDougall is philosophical about that: “It is what it is,” she says, smiling, and she wouldn’t give it up for the world.