You can purchase a copy of "Dreaming Maples" on Amazon.com, or directly from me via claudiajricci@gmail.com.

It was February, 1991. My son, Noah Kirsch, was a toddler. We were having coffee at my friend Michéle's house in Spencertown, New York, where our family lived for so many years in the beautiful old farmhouse with the magnificent and mystical pond. 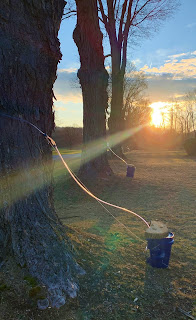 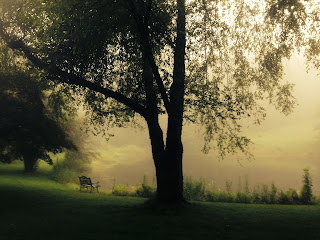 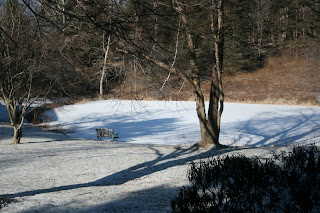 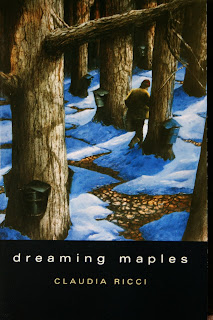 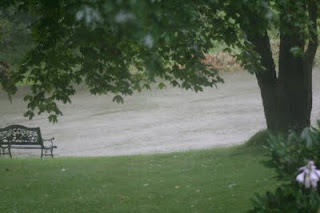 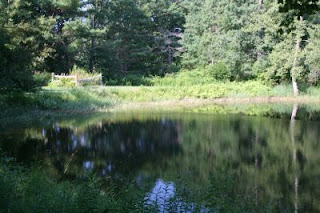 I had started writing fiction the summer before. On a hot July weekend in 1990, a few weeks after my dear uncle, Claude Rotondo, only 56 years old, died of a heart attack. Writing fiction was helping me breathe. Was making me feel alive!

That day at Michéle's, I had Noah on my lap in her living room when I happened to look out the window into the grey forest of maples.

I saw Audrey. As real as if she was there. She was an older woman, with silver ripply hair blanketing her shoulders. She was perfectly balanced, walking through the forest with silver pails in each hand.

I had no idea why I was "seeing" her. I hadn't yet realized that I was getting the first vision for my first novel, Dreaming Maples. I didn't know that I was going to "SEE" each and every scene in the book!

As it turned out, Audrey was the matriarch of my story. She and her partner lived in Vermont in a women's art collective. The women sugared the trees to make syrup that they would sell to help support themselves as artists.

Much much later, after the novel was published in April of 2002, I would tell readers that the Audrey vision was the first of three visions I needed to start writing the book. There would be a second vision six months later in July, 1991, when I was standing outside in our yard with my three kids. Suddenly, a character named Candace, Audrey's granddaughter, sped by on the back of a motorcycle! I could see quite clearly that Candace was nine months pregnant and she was riding behind Mark, her boyfriend.

The last vision came in August, 1991. I hadn't yet begun writing. In this vision, Candace was leaving her baby beneath a sugar maple.

I began writing in September. By the following spring I had written 75 or 100 pages, the scenes that spanned the day that Candace -- who was a painter -- gave birth to baby Grace. 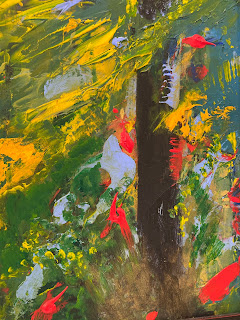 But I was still way too shy to call what I was writing a novel! I was taking a fiction workshop with Eugene Garber, a distinguished fiction writer and one of my all-time favorite professors at SUNY Albany, where I would eventually get my PhD in English (and Dreaming Maples would be part of the writing I did to satisfy the doctoral requirements.) I kept calling the novel "the long thing that I'm writing." Somehow, that semester I began to see that maybe, just maybe, I would be capable of writing a novel!

Eventually I would explain to readers that I didn't start writing the novel until all three visions were fixed in my mind. And writing would be a mega-marathon, taking me five years to complete! I used to tell readers that writing a novel was for me "a journey akin to driving across country in the dark without a map, with only those three postcard visions guiding my way!" It wasn't until all three visions were encased in the story that I knew I had finished the book!

All this history came to mind yesterday when the weather suddenly turned sugaring! To make maple syrup you have to tap dozens and dozens of sugar maples. The sap that runs in the weeks before spring arrives is boiled down in a sugarhouse into the sweet stuff we put on pancakes and waffles.

I became something of a maple sugaring expert writing Dreaming Maples. Every year at this time, I'm drawn back into the world that I created for the novel. Maybe that's why I love maple syrup so much!

To purchase a copy of "Dreaming Maples," go to Amazon.com, or contact me directly at claudiajricci@gmail.com.

EDITOR'S NOTE: THE FIRST PHOTO IN THIS PIECE WAS SUPPLIED BY KATHY JOY HOFFNER, AN AMAZING WRITER IN ERIE, PA. (HOW I MET HER IS A MIRACLE IN ITSELF. SUFFICE TO SAY IT WAS THAT ONCE UPON A TIME INFANT, NOAH KIRSCH, WHO MADE THIS AMAZING CONNECTION!!! MORE ON THAT SOON!!!) Kathy is the author of a four-book series called, "Breath of Joy." She writes for the collaborative group, Books For Bonding Hearts, and is a blogger at www.coffeewithkathy.blogspot.com. Kathy's brand new children's book, "Will You Hold My Story?" can be found on Amazon.com. Kathy snapped this photo in the little hamlet of Cable Hollow, Pennsylvania, where her mother resides, and where sugar maple tappers are enjoying a robust season.

I can't believe Dreaming Maples is 30! It is a beautiful book and I feel so fortunate that it graces my bookshelf. Your baby is all grown up!