NOTE TO READERS: Don't miss a piece in The New York Times suggesting that it may have been comedian Jon Stewart's December 16th show, devoted to promoting federal legislation providing health benefits to firefighters and other first responders at the 9/11 tragedy, that led to the bill's successful passage last week! The Times' piece compares Stewart's role in advocating for the bill to the work of Edgar R. Murrow, famous for his pioneering TV commentary on a range of social issues. Fascinating piece! CR 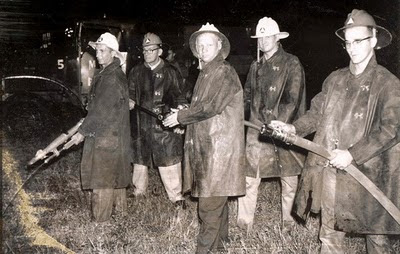 I
They must believe,
if need be,
they could put out the fires of Hell.
On duty or not, they all raced to the scene.
Their mission --- to save.
Where could such courage come from?

Hurled into the maelstrom of the
Twin Towers,
unprepared, unable to communicate,
lost in smoke, flames and collapse.

I can't see. Where's John, Tony, Alex?
I can't see.
Find the staircase. Radio's full of static.
Oh shit!
This is bad. Any survivors?
Worst I've seen.
Do Doris and the kids know I'm here?
God, I want to see them again.
Heat, smoke, flames
What is that howling

Speeches claiming to honor their sacrifice,
if only politicians had had the foresight to
have a pin in their lapels of – say
a fireman's hat
opposite their American flag pin.
What speeches ….

We are here to honor these brave men and 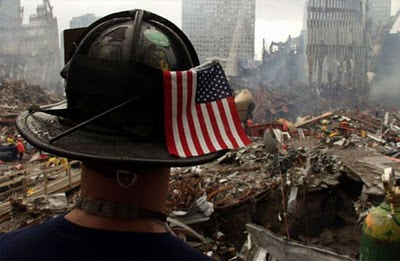 ensure they have not died in vain.
They are committed to God's care.
I stand with them and their families
in their bereavement.

Not only will their sacrifice be remembered,
we will kill or capture the godless ones who
planned this atrocity.

And so politicians seek to honor themselves.

No matter,
the dead firemen not here.
They are at their firehouses watching Americans,
America leaving
flowers and gifts and tears.
Loving and loved.

Writer Robert G. Willner lives in Chatham, New York. He has been an attorney and president of a Columbia County drama company called StageWorks. He is the author of "If not now -- when? A MEMOIR IN POEM," published in 2008.
Posted by Claudia R at Monday, December 27, 2010