"Silence in the Storm" There was laughter and the creaking of chairs, and there were silences too, but there were always silences. She was used to the silences.

Since she had never experienced a summer storm like this before she was a bit unsure what to do. Should she fill up the bathtub with water? Should she get more candles out 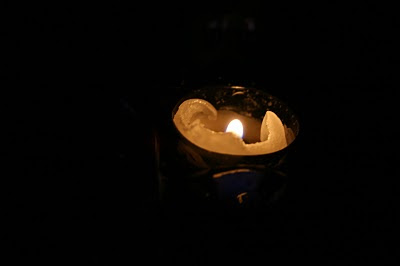 just in case the power went out? Should she bring the lawn chairs in?

She had become passive, like those women she didn’t want to be.

“No, “ she said out loud to break the silence. “This isn’t the way I thought I would be,” she said. And it wasn’t. This wasn’t the way she thought she would be at all.

When the phone rang breaking the silence she jumped. “Hello?” she said quietly.

“Hey,” he said. “I was just calling to see how you were holding up over there.” It was him, the man from the canoe.

Her heart began to beat. “I’m doing okay,” she paused. “What about you?”

“I’m doing okay,” he said. “This is supposed to be quite a storm and I was checking that you were okay.”

She waited for him to say something else and when he didn’t she said, “How is everything going?”

“Okay,” he said. “Actually fine, everything is going fine. I haven’t been around for a while because I had to take care of a few things.” He paused. “That is why I haven’t been by.”

“Oh,” she said. What should she say? Should she acknowledge that she noticed he hadn’t been around? Should she ask what he had to take care of?

“I haven’t been out on the lake lately,” he said, “because I’ve been away.”

“Oh,” she said. She waited for him to continue and when he didn’t she said, “I haven’t really been out much myself. I really haven’t been out rowing.”

“Stopped, I guess. I don’t know why,” she fell silent. The silence felt good and she wished he would hang up so she wouldn’t any longer have to break the silence of her house with her voice.

“You shouldn’t stop,” he said. “You should keep rowing. It’s good for you.”

“A hot date?” he laughed. When she didn’t respond he said, “I’m just kidding you know.”

“I was really just calling to see if you were alright. If you needed anything.”

What would she need him for? Wasn’t this the whole point, to get away from people she believed she needed? Wasn’t the point to not need anyone ever again?

A loud crack lit up the room and made her jump.

Then the power went out.

Writer P.M. "Peg" Woods, Ph.D., is Assistant Director of the Writing Program at the University of Massachusetts at Amherst. Her first novel, "Spinning Will," was published by Swank Books. "Silence in the Storm" is part of her second novel, which is in progress and has the working title, "Backstory." Woods lives with her husband, Ray Cusson, and their two dogs, in Shutesbury, Massachusetts.
Posted by Claudia R at Wednesday, December 22, 2010