If You Work Hard, You Deserve a Home, and More... 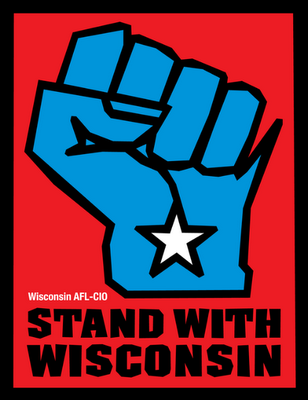 Early Wednesday evening, the New York state Senate struck the first blow in an attempt to dismantle collective bargaining in New York. A bill to strip away the heart of fairness in layoffs -- seniority -- passed the Senate 33-27. All Republicans voted in favor of the bill along with two Democrats, Senators Jeffrey Klein and David Valesky. (Senators Thomas Duane and Owen Johnson were excused.) A "yea" vote was a vote against public employees.

You will hear from some who voted for this horrific bill that it's only a "one house" bill; it only applies to New York City; or is simply designed to "start" a conversation. None of these excuses and lame attempts at disguising the real significance of this vote are acceptable.

Leaving it up to the Assembly, trying to pit city against suburbs, and claiming to use the bill to prod others into action show a complete disregard for the tireless service each of our public-sector members provides.

NYSUT has and will always be willing to be part of any meaningful discussions about continually improving the effectiveness of our members. Our role in last year's Teacher/Principal Evaluation Law demonstrates our commitment to a carefully thought-out process to guarantee an effective teacher in every class. We understand and support the role of performance in employment decisions. But, we also understand the value of experience and the knowledge acquired through practice.

NYSUT will not be part of any scheme to diminish the value of each and every member regardless of her or his years of service. We will not allow a bill that exposes our members to harassment, favoritism and intimidation to divert us from our commitment to defend collective bargaining and the right to organize.

Today's vote has little to do with New York state's economy or that of New York City. It is no more than a cruel attempt to manipulate the law and the collective bargaining process. Those who voted for this bill today have put New York's children at risk by using them as helpless pawns in a perverse political charade to support the mayor of New York City.

Today's shameful vote was motivated by a desire to weaken public employees and their unions. I know that I can count on you -- as you can count on your union -- to use this vote as motivation to redouble our commitment to protecting the rights of every worker -- whether in the public or private sector.

Democrats looking for a message don't need to hunt any further than Tuesday's New York Times, where a 67-year-old retiree from Tennessee lays it out real clear. In an interview with the Times, after being polled on attitudes towards public employees, Phil Merritt said:

Merritt got it all in there -- if you work hard you should be able to have a home, a retirement and send your kids to college, a simple reminder of the core of the middle class American Dream. And he told us what's changed too: it's now a struggle to keep a toehold in the middle class, even with both spouses working.

The Times quoted Merritt because he did a good job summarizing the view of most Americans on the question of whether worries about the deficit trump concerns about good jobs. The answer was a resounding no. The Times poll found that large majorities of independents and Democrats, as well as majorities of those in non-union households, opposed cutting the pay or benefits of public workers to reduce deficits. Unfortunately that's what the unions in Wisconsin have actually agreed to do. But where they have drawn the line is on giving up on their rights to bargain in the future for their piece of the American pie.

If most Americans understand that it is foolish to cut the deficit by cutting people's ability to make a decent living, the poll also discovered that people are willing to pay more to protect those jobs and the services those workers provide. By margins of two to one, people were more willing to raise taxes than cut benefits for state workers or financing for roads or schools. Of course, that's not what most governors are doing. 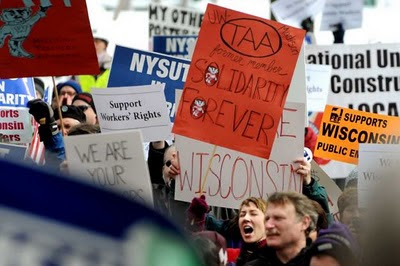 For a simple explanation of why the governors and Republicans in Congress have it wrong, and another lesson for Democrats in messaging, we can turn again to a recent article in the Times. Last Friday, Bob Herbert concluded his column with a quote from one of those Americans who got kicked out of the middle class during the recession. Lynda Hiller, a woman from Allentown, PA, lost her home after her husband lost the job he had for 35 years as a long-distance truck driver. Hiller told Herbert, "I don't think things are going to get any better. I think we're going to hit rock bottom. The big shots are in charge, and they just don't give a darn about the little person."

Those big shots, like the Koch brothers and all the other corporations and wealthy that engage in the legal bribery we dignify with the name "campaign contributions," have made it clear that their agenda is to do for public employees what corporate America has done for so many private workers: drive down pay, cut benefits and kill unions.

But this is really a good news story -- it's good news when powerful, progressive messages that work can be found in the voices of ordinary Americans in the day's news. As we're seeing in Wisconsin, people around America are finding their voices. Progressive organizations are coming together around some simple ideas: a strong America is built on a strong middle class; we need to reclaim the American dream from those who have stolen it. And some Democratic elected officials -- like the Wisconsin 14 -- are finding that it's good politics to be courageous in defense of an America that works for all of us.