Is Your Boss REALLY in the Business of Creating Jobs? Or Making Money? 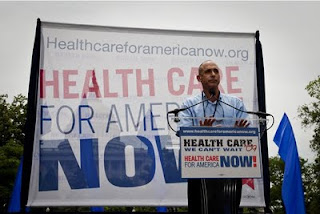 Spinmeisters for the U.S. Chamber of Commerce and Republican politicians like Speaker John Boehner like to call businesses "the job creators." But what every American knows, if he or she thinks about it, is that unless you work for a small business, your boss will only create a new job if there isn't a cheaper option: force you to work longer hours, hire a temp, purchase new technology. Or if you work for a big company, get the work done overseas.

I was thinking about this after reading a recent article in The New York Times ("Companies Push for Tax Break on Foreign Cash"), which described how corporate America wants to be able to slash the taxes it pays on overseas profits that it returns to the United States from 35% to 5.25%. The corporations are selling this as job creation, saying that the billions of dollars they would bring back home will be invested in jobs. Who are they kidding? These are the same companies that are already sitting on nearly $2 trillion in cash, which they clearly are not investing in jobs in the United States. What will they do with the money if they get to bring it back on the cheap? Last time the corporations convinced (translation: "paid") Congress to give them a repatriation holiday, 92% of the cash was rewarded to shareholders in the forms of dividends and stock buybacks.

Even if they did need money to create jobs, there's little chance corporate America would locate those jobs in the United States. Apple has $12 billion in profits waiting offshore to be repatriated, but it's clear that bringing that cash home won't mean more jobs for American workers. Apple's entire U.S. workforce of 25,000 is dwarfed by the 250,000 workers who make Apple products for the Chinese company FoxConn. Apple is far from alone. From 2005 to 2009, IBM expanded its international workforce by 100,000 while cutting 29,000 U.S. Employees. All told, U.S. multinationals cut their U.S. workforces by 2.9 million during the 2000s while adding 2.4 million employees overseas.

Last February, President Obama embarrassed himself by going to the Chamber of Commerce and pleading with corporate executives to invest some of the $2 trillion in cash in the United States. The President appealed to the Chamber to respond to forecasts of "a healthy increase in demand" and invest in job creation. He even declared to the lobbying association that had led the fights to kill his signature achievements in office -- health care and financial reform -- "we're in this together."

No, Mr. President, we're not in this together with corporate America. Corporations are in it to maximize profits and boost CEO salaries, not help the U.S. economy or put people back to work.

With no "healthy increase in demand," on the horizon and unemployment heading back up, the President has talked more about government-led solutions that would actually create jobs in America. Near the end of his address on Afghanistan, and in a full-throated pitch at a Democratic fundraiser in New York City the next evening, Obama called for investments in education, infrastructure, and clean energy at home.

Democratic leaders in Congress have also started to sharpen their focus on the failure of corporations to create jobs at home. Nancy Pelosi's reaction to the Majority Leader Eric Cantor's walking away from budget talks was, "Yes, we do want to remove tax subsidies for big oil, we want to remove tax breaks for corporations that send jobs overseas... "

The Republican leadership in Congress has taken investing in job creating programs and closing corporate tax loopholes off the table in the debt-ceiling negotiations. But if the President is to be reelected, he needs to make it very clear to the American people that he is doing everything he can to create good jobs at home. He should oppose budget-cuts in the debt-ceiling talks that kill jobs, including cuts in education and Medicaid. Moreover, he should insist that any debt-ceiling deal include closing corporate loopholes that encourage profits to be used overseas and invest those savings in measures to create U.S. jobs. And when Republicans charge that doing so would hurt the "job creators" he should ask Americans a simple question: "Is your boss in business to create jobs in the United States, or to make as much money as he can?