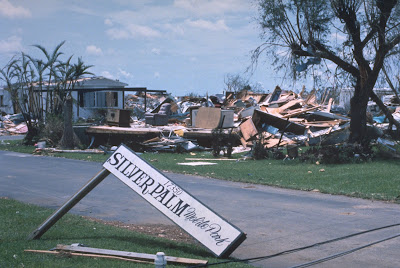 
Well, the wind is still howling outside, but it looks as if our “Irene Encounter” is about to end as quickly as an ill-fated romance.

I know there’s been lots of talk about over-preparedness, and hurricane hysteria, and much-ado-about-nothing in general, but allow me to post a brief counterpoint here.

Erring on the side of caution, particularly when it comes to the enormity of disaster that might have happened in New York City, isn’t a mistake. It’s always nice to say after the fact – “So OK, A little wind a little rain, so what!” So now we all have a little extra bottled water, a few extra batteries, and some tins of tuna that will keep into the next millennia. So what.

They called it “The Big One” -- it was Category Five -- and so it was. I arrived at the Miami Airport on August 27th intending to stay as long as needed to help my family, and then, to join in Red Cross Relief efforts.

No matter what the reports said, no matter what images came across on the television, nothing could prepare me for what I saw.

Heading south from the airport, familiar terrain became less and less so. Landmarks flattened. No street signs. Foliage stripped as if by napalm. Buildings reduced to rubble.

My brother’s house was heavily damaged.

For the next week and a half we worked in 90-plus degree heats trying to cover the gaps in his roof. We woke early to try to get in a good solid three hours before the heat and humidity became intolerable. Afternoon thunderstorms came like clockwork.

There was no power, no mail, and no safe drinking water for almost 3 weeks. We shared what we had with neighbors. I had brought a propane stove and knew how to use it from camping days. We fed anyone who was around.

The tale of my work with the Red Cross is another story unto itself. The homeless, the terrified children, the injured, those we went in search of and never found in trailer parks that now resembled an angry giant’s playground.

Now I knew that Irene wasn’t going to pack the wallop of Andrew. A Tropical storm vs. a Category 5 Hurricane is no contest.

But still, preparedness is a good idea. And it’s wise not to let this storm make us cynical about predictions.

How did I spend my day today? I made a number of calls to friends, particularly women living by themselves with a single question, “Do you feel safe?” I kept in touch with my family, managed to have a nap, and generally just give myself permission to do nothing other than ride our the storm.

I take Irene too, as an exercise in surrender. She would have her way with us regardless of how prepared we were. But, no matter the outcome mindful is always better than manic.

During the height of the storm I noticed that birds, even the tiniest hummingbird were still taking advantage of our feeders. I took my cue from them. No matter what, life has to go on.

Writer Judith England, a registered nurse, yoga instructor and massage therapist, writes the Holistic Health blog on the Albany Times Union. She is a frequent contributor to MyStoryLives.