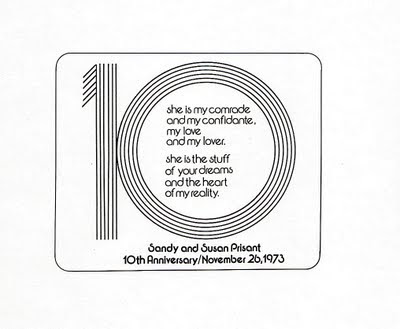 This was the way I felt about Susan when I placed this little homage to her in all editions of New York Magazine on our 10th anniversary. I was glowing.

But now we have moved on. Far, far on. To another dimension that weaves intense pain with intense beauty.

This is the tenderest constituent of long-term illness—the relation between patient and the unfortunate partner thrust into the role of carer. What happens to that relationship and how it evolves is impossible to predict beforehand, but it is crucial in the end.

For me, those words above, written with such passion and pleasure decades ago have now been rendered inadequate.

I have never believed that people change. Not really. But incredibly Susan has. Somehow she has grown, late in life, to the most amazing of human beings. It was in late winter that my condition really began to deteriorate. Like most partners, she joined me for every doctor visit. Unlike most she also did everything else. She fought for me when I was too physically weak. She would not allow any doctor to take the easy way out. She would not get down.

At home, Susan, as an author and educator,always did 90% of the work. Now she does 99%. She also must now do virtually all the driving—a couple of hours every time we go to the University of Miami Medical School once or twice a week. In between the tests, the dogs, driving, the doctors, and her other work, she’s preparing dinners to suit evolving medical diets. By last count we estimate she’s made over 17,000. Seventeen Thousand.

At the same time she was—she is-- literally terrified by what the doctors keep telling her. Yesterday a specialist told us:
“I’ve decided not to give you the exploratory test cardiology wanted, because
it would be too great a risk. It would not be prudent to risk losing you on the
table, simply to prepare you for the real surgery which is many times (50? 100?) riskier.”

Susan and I are sitting in this guy’s offices as he casually tells this story. For emphasis he repeats it a second time. I look at Susan. She is swallowing hard. She is dying inside.

But Susan is a stoic. She’s lived with spinal pain for two decades Her surgeon started calling her that in the first year. She will not defer to her illness, but never stops tending to mine.

Her character traits have now expanded to something superhuman. Think of every single positive human trait. Just think about them—I can’t list them because it would just sound trite. This amazing person cannot be written off as a Mary Poppins imitation.

The worse it is for me, the kinder and more thoughtful she becomes. A million little irritants and huge fatigue bounce off her. Day after day. If we were Catholic we’d be looking at beatification here. And the whole time she’s going through hell, she refuses to put any of her greater burden on me.

I can talk to Susan about all this and I can write to you. I can even make her happy for five minutes by washing the garage. But I can’t really change anything unless I can somehow get better.

And our relationship? It is Susan who is keeping me alive. And it is only for Susan that I fight to stay alive. We have moved on from 1973.

Writer Sandy Prisant is fighting for his life, and writing about it in an incredible series called "The Journey We Take Alone." He and his wife Susan, also a writer, live in Florida. You can search for earlier parts of the series by using Sandy's name in the Search function. Sign up as a subscriber to receive regular email notices when new articles are posted on MyStoryLives.