Get Yourself to Barcelona!! (The Journey We Take Alone, Part 19) 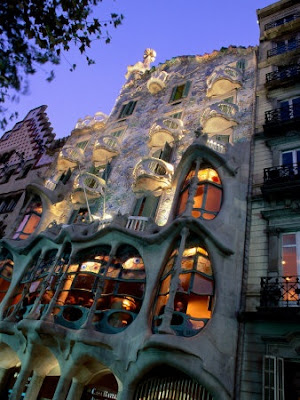 If you haven’t been to Barcelona, stop reading. Get to the airport and go. Now. It’s that good.

It was pretty close to paradise for us until one ordinary afternoon in 2006. Susan and I were working at the computer when I began to notice what seemed like a psychedelic window shade inside my head, scrolling slowly down over my right eye. Not much else was happening -- no pain at all. There was just no sight on the right.

If you’ve got a string of health conditions like I do, you know stuff will happen; you just don’t know what. When it does, you try to figure out two things: (A) What is going on? And (B) does it require immediate medical attention? If you get (B) wrong, it can be harmful. Or fatal.

There’s nothing heroic about doing this. You can’t have a full-time doctor sitting in your living room. Unless you’re Michael Jackson -- and look how that worked out for him.

The only practical solution for those of us with chronic illness is to be our own first responder. Uncomfortably, many of these things happen at 3am on the weekend, but this was 3pm on a Thursday afternoon.

The “drill” is simple. Here’s what I knew: This had never happened before and everything else felt fine. But what condition could suddenly rise up and snatch one eye in a matter of seconds? I could only think of one; anyway sight is the last thing any of us want to mess with. The conclusion: (A) I did need a doctor, because (B) this was probably a stroke.

Living downtown, our GP was just six blocks away. We walked purposefully to the doctor’s office.

All I knew about strokes is what most of us know -- prompt treatment matters. If that’s what it was, we were probably doing the right thing. If it wasn’t a stroke I was having a harmless walk through the beautiful streets of Barcelona (the Gaudi architecture is something magnificent.)

It’s easier to see your doctor in Barcelona than it is in other places. Every district has a local health center where most physicians and some other outpatient services are housed. You can make an appointment or just walk in. I hurried past the half-dozen patients waiting to see our doctor and barged into his office:

“No puedo ver,” I said. “El mio ojo derecho.” The Doctor stopped what he was doing, came round his desk, looked in my eye and told me to take a taxi to the hospital. Immediately. That’s how public health works in much of Europe.

The taxi dropped us at Hospital Clinic, a large medical facility nearby. I walked in, repeating “no puedo ver” (I can’t see) to anyone who looked like staff. I was ushered to a hallway beside a locked door. Soon a doctor arrived, opened the door and got down to business.

She sat me down in front of a device that flooded each eye with light in isolation. When she got to the right eye, she involuntarily gasped. The news could not be good, but she said nothing and took me to another room for two further tests.

There would be no MRIs, CT’s or blood tests. The doctor apparently had enough for a diagnosis. She took me by the arm and pulled me into the ER. Staff put me on a gurney and started pulling my clothes off, asking who I was for the first time.

Shortly I was on the way upstairs. To the stroke unit. Apparently a blood clot on the way to my brain got short-circuited in my eye.

A doctor came in. “We have a treatment for this we would like to offer you.” His uncertainty seemed strange and we said we’d like to make a call -- to Boston. The doctors agreed. Susan’s nephew is an ophthalmic surgeon in Massachusetts. She got him on the line:

“You’re lucky to be in Spain. They’re going to give you the treatment that the FDA still hasn’t approved for ocular stroke in the US. There is a risk. The treatment could cause a heart attack, but I think it’s worth having,” he said. We quickly weighed the risks and decided they were worth taking. 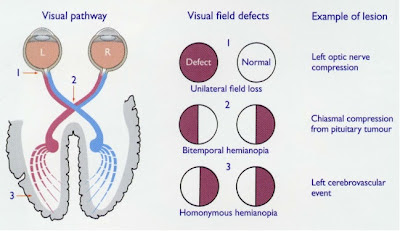 The treatment was done by nightfall. There was no immediate change in my vision. I woke early and something was happening. In the dead center of the eye there was light and some vision through jagged-edged debris. But I could see fairly clearly. It was like looking through a cracked egg that was opening outward. Would it keep moving away? Would it disappear?

I closed my eyes and let them rest further after the trauma, hoping they were healing. An hour later I opened them again and reality set in.

Hope and the sight in my right eye were both gone. My left eye was seeing the whole room, but from around my nose. You don’t actually see a black spot; you just see everything from the left side. I called the nurse and told her; there was little she could say. And little more the doctors could do. It was still early morning and no one to talk to at the moment. I had to cope with this alone.

On the second morning, my wife didn’t just bring espresso and croissants. She brought the morning paper. Newspapers are a part of my life. I’ve written for a few and still read several. It’s always good to see a fresh one.

Susan climbed into the hospital bed with me -- an old custom of ours -- and started reading the paper aloud to us. But after a while, it felt natural to take the paper from her and read it for myself.

And that smoothly, the worst had passed. My brain was adjusting immediately. Somehow I was reading like before. Life was going to go on.

Now there’s a little downside -- you need two eyes to create depth perception. So I can no longer hit a tennis ball very well and sometimes pour from a pitcher onto the table, at a point just behind my glass. And the odds of me getting a second stroke have risen enormously.

But maybe what mattered most was this: for all the symptoms, for all the pathologies I live with, for the first time something had happened to a key part of my body that could not be repaired, replaced or improved. That was that.

On the one hand the clot going to my eye probably saved my brain. On the other, I’d passed another milestone in the journey.

Writer Sandy Prisant lives in Florida with his wife, Susan, and their two dogs, Dolce and Vita. In "The Journey We Take Alone," he is writing about his life, including his lifelong struggle with a deadly kidney disease. Sandy is now awaiting a heart and kidney transplant, a treacherous operation which his wife Susan wrote about recently on MyStory. To read Sandy's series, "The Journey We Take Alone," go to the search function and type in Sandy's name. To read Susan Prisant's series, "The Journey We Take Together," type in her name. One of Sandy's earlier pieces from MyStoryLives was recently featured on The Health Care Blog.