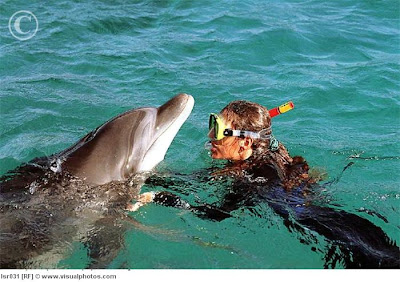 Note to readers: Sorry to have been out of action for so long. Chronic illness is not just bad for you, it’s annoying. It gets in the way of thinking and writing. -- SP

“Dolphin Reef Eilat, on the shores of the Red Sea, is an ecological site, unique in the world, where visitors enjoy a secluded beach, magical views, and meetings with dolphins in their natural habitat.”

But for me, it was another close call.

Early on, Susan and I had decided that, facing an uncertain life with my health situation, our priority would be: the world. See it. Live it. Taste it. All sorts of adventures. And we have. From Malmo Sweden to Lesotho; the Amazon to Shenzhen, China; Auschwitz to Australia’s Gold Coast.. We’ve been to every continent and lived in a half-dozen countries including Israel, Italy, the UK, South Africa and Spain.

We’ve sought out places the media bad-mouthed; we ventured behind the Iron Curtain, when there was one. To South Africa, which is more about stunning vistas than crime-ridden townships. And to the Middle East. Israel is another place that looks very little like the media reports.

But to do all this in my condition is not what the doctor ordered. It’s the life we chose, with eyes wide open.

Which brings us to Dolphin Reef. It’s at Israel’s southern tip, sharing the shoreline with Jordan and Egypt. In the middle is a huge bay where a pod of bottlenose dolphins play with human divers. The Dolphins were brought as a group from the Caspian Sea years ago to give them a safer home. Ecologists let the family head for the open Sea or stay in the Bay. They chose the Bay, where you can rent a wet suit and snorkel gear and swim out to spend time with them.

We were a few hundred yards offshore, when a baby dolphin approached and wanted to play with us. We treaded underwater as the chubby young pup swam around us. It was great, but it meant lots of shallow breathing and taking in the usual amounts of sea water through the snorkel.

And that was enough to cause a big problem.

I’d almost made it back to shore, when I came up out of the water gasping for air, yelling to Susan, “Can’t breathe!”

Soon I was barely conscious but could feel hands and arms all over me, dragging me onto shore and out of my wet suit.

Suddenly Susan was giving me mouth to mouth CPR. Then everything went black.

Minutes later I was in an ambulance at the edge of the beach. They’d already intubated me and breathing was restored. I looked up at Susan, smiling, as the ambulance pulled out of the sand and onto the road. I didn’t realize I was having my third heart attack.

In the ER at Eilat’s main hospital I spent the next hour coughing up sea water and phlegm. I would only learn what that meant a day later. I was still in the bottom of the wetsuit and was sharing my bed with lots of sand from the beach.

The staff quickly got me up to a bed in intensive care. I was stable. And it was care every bit the equal of the US, even in this small Israeli desert city.

The next day, a very serious cardiologist with a young intern came to see me in ICU. After an examination she told her assistant to write down her conclusions. It felt like hearing my own death sentence:

They said little and left. Physically I was in no discomfort. And when you get news like this, it’s more natural to feel acceptance than terror. After all, I’d been on bonus time from the first day of my life. I’d heard this kind of news so often that my natural instinct is not to say “Is this really it?”, but rather “no point in slowing down now.”

After the standard seven-day hospitalization for a heart attack, Susan and I went back to discovering the world. A year later, we returned to Dolphin Reef. We never saw that young dolphin again, but we asked one of the staff what was new:

“We had a wild rescue last November,” he immediately replied. “A guest had a heart attack---in the ocean.”

Writer Sandy Prisant lives in Florida with his wife, Susan, and their two dogs, Dolce and Vita. In "The Journey We Take Alone," he is writing about his life, including his lifelong struggle with a deadly kidney disease. Sandy is now awaiting a heart and kidney transplant, a treacherous operation which his wife Susan wrote about on MyStory last week. To read his series, "The Journey We Take Alone," go to the search function and type in Sandy's name. To read Susan Prisant's series, "The Journey We Take Together," type in her name. One of Sandy's earlier pieces from MyStoryLives has just been featured this week on The Health Care Blog.