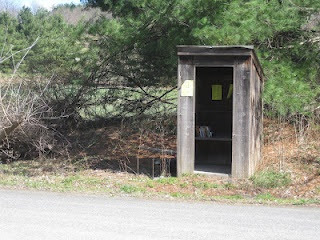 Well, T.S. Eliot sure knew what he was talking about when he wrote in "The Hollow Men:"

Between the idea
And the reality
Between the motion
And the act
Falls the Shadow.

The first time the idea of the Spencertown Little Free Library arose for me, I knew it could be in the old school bus shelter on Beale Road, but the idea disappeared before I could take the first step toward creating anything. The second time the idea arose, some two or three weeks later, I knew had to act immediately, lest the same thing occur in the form of even more distraction, discursive thinking, shiny objects, forgetfulness, sloth. I didn't want that to happen.

I ran out in the rain to the school bus shelter with a broom, and some temporary signage, and a dozen great books, and I got after it. I banged enough of it together so that it actually existed. So it was actually started. So it was actually something, something more than just an idea. More than just thinking. More than just a name. The idea was quickly to erase the Shadow, the one that falls between the idea and the reality, before it again sucked the idea of the Spencertown Little Free Library into a void. Or again concealed or obscured it. The idea was to overcome the inertia, even the habit of just thinking about things, and make something.

Cash donations aren't sought. No. The idea is to ask you, dear reader, to stop off at the corner of Beale Road and Route 203 in Spencertown and improve what's already there. To help it grow. To build on top of the foundation.

I live just down Route 203 from the Spencertown Little Library. You can see my yellow house from there. And if you would like my help with your donations, all you have to do is call me or drop by.

Mostly, I want to ask you for your donations and invite you to come out and grow this unusual, wonderful, community project.

Writer David Seth Michaels is an attorney in Columbia County, New York. This post appeared first on his blog,The Dream Antilles. He is the author of two novels, "Dream Antilles" and "Tulum."
Posted by Claudia R at Thursday, April 05, 2012