Note to Readers: A great man, a devoted father and husband, a wonderful brother and brother-in-law, a veteran of World War Two, a top-notch garage mechanic who knew cars inside and out, a man with a sharp wit and great sense of humor and a ton of good friends who adored him. This was my Uncle Dante Rotondo, my mother's brother, and a native of Canton, Connecticut, who died a week ago, on Tuesday, April 17, 2012, at the age of 89. Uncle Dan was buried with military honors on Saturday, April 21, 2012 in a tiny cemetery in Tariffville, Connecticut where my grandparents and other aunts and uncles also rest. "Taps" played, rifles saluted him, and the tears flowed freely. The following appears on a website of veterans' voices supplied by the Canton, Connecticut school district.

Dear Uncle Dan, you will be so deeply missed! 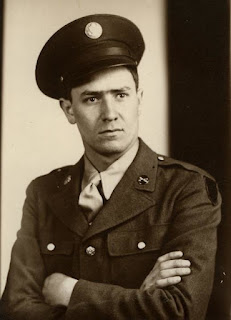 Dante Rotondo entered the United States Army at the age of twenty and became a member of the 86th Infantry.  He was in the Field Artillery Division Service Battery where he would primarily haul ammunition, food, and supplies in his military truck.  He had initially been deferred from the army for three months, so he did not enter until February 1, 1943, and his service ended in April 1946.  As a sergeant, his Military Occupational Specialty was in the motor pool; he remained in the motor pool for only a short while and was eventually transferred to driving.  Traveling between Massachusetts, California, Texas, France, Belgium, Germany, and Austria, and eventually even the Philippines, Dante Rotondo had his fair share of interesting experiences.  Prior to entering the war he had worked as a mechanic in a local garage, which enabled him to have the skill and ability to serve the army well.  Upon returning from the war, he married and raised children in the town of Canton, Connecticut, where he owned and ran his own garage.

While most 20-year-olds have no concept of the meaning of divine intervention, Dante Rotondo had a firsthand understanding of the principle.  Surprisingly enough, it was not some religious figure or a family member who pointed this out to him; instead it was his very own truck.  Dante was a stubborn young man; (and, in fact, Dante is a stubborn old man, according to the testimony of his wife).  This quality may have been the very one that saved his life over a half century ago.

Dante’s truck was an old one that had a frequent habit of breaking down.  The problems began with what Dante described as “knocking,” eventually increasing to the point where he was forced to pull over and let the old hunk of junk cool down.  Dante found himself doing more cursing, kicking, and complaining than driving.

By the time he and the other men of the 86th Infantry got to the Battle of the Bulge, the fighting was nearly over.  Dante reported the poorly running truck to the Motor Sergeant who at first showed no signs of sympathy.  “Drive it until it blows,” was the only command he gave.  Stubborn Dante was not satisfied, nor would he be until either he got a new truck (which during the war years was next to impossible, as nothing came new) or he had the old one repaired.  With the Motor Sergeant standing beside him, he shut the truck down and restarted it, demonstrating to his superior that the truck was in dire need of repair. 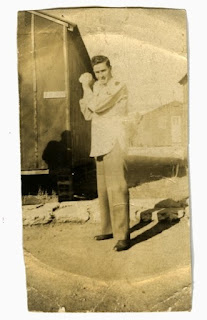 His point proven, it took three long days for the army mechanics to replace the engine.  During that time, Dante sat and watched.  The most unbelievable part of the whole experience was not how well the mechanics worked on his vehicle, but how well they ate.  Dante and his men ate C-rations while these guys ate chicken, stuffing, and mashed potatoes.  Dante wondered if he was even in the same army. Nevertheless, he knew that it was imperative to return to his infantry with a functioning vehicle; and he was willing to wait for as long as it took the mechanics to get the job done.

In the meantime, during the Battle of the Bulge the 86th infantry was pinned down by German aircraft.  Men died one by one, their individuality a matter of indifference to the German “88’s”.  American soldiers dug foxholes left and right, and scavenged for their lives.

Every division moved so quickly that Dante had to guess where his own might be in order to meet up with them.  Dante knew where the 86th had been, and where they were headed, but didn’t know exactly where they were now.  So he traveled away from where he knew they had come from and toward where he knew they hadn’t yet been, and he found his men.  All trucks were numbered, and he just happened to run into a number he recognized.  “Where have you been?” the men of the 86th Infantry questioned.  Well, of course, he had been getting his engine replaced.  Astonishment struck Dante’s face as he came to the realization that his infantry had seen action, the only action they would see for the entire war, and Dante had missed it.

Some men may have felt shortchanged, but not Dante.  All the time he had spent complaining about his truck breaking down and having it repaired had put him out of harm’s way.  That broken down heap of metal was the best thing that could have happened to a guy like Dante.  “Divine intervention,” he agrees.  “Somebody up there must like me.”

I have long wondered about the man who once owned the Canton Garage at 198 Albany Turnpike, Canton, CT, now "Canton Animal Hospital." Paul Rotondo gave me a photograph of the garage his father Dante established. Proud to now own the building of a WW2 veteran, who like my Dad, served his country and came home to quietly raise a family. They were truly the greatest generation.

Send me an email and I will send the photo for adding if you like....: