Like all dreams, it’s hard to know exactly when this one started. Maybe it was the day way way back in April of 1985 when I walked away from a plum job as a staff reporter for The Wall Street Journal in New York, 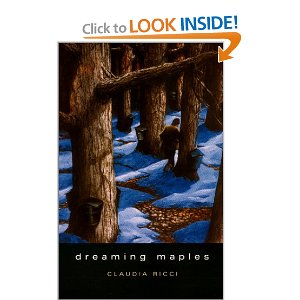 pushing my infant daughter Jocelyn in her carriage. Smitten with motherhood, I knew my workaholic days in corporate America were over. My family and I picked up and moved to a peaceful farmhouse in the country.

Or maybe the dream really took hold on that cold February afternoon in 1991, when a good friend and I were sipping tea in her living room. By then, I had three children. My third was Noah, a toddler bouncing on my lap. At one point in the afternoon, my friend got up to go to the kitchen.

I sat, staring out the window into the grey maples. Suddenly, without a bit of warning, I saw someone. An old woman. She was walking in between the stark grey winter trees. She wore a long grey coat and carried two magnificent pails that seemed to be hammered out of gleaming silver.

The vision was so real that I felt like I could touch the soft grey wool of her coat. I could see the light sparkling off those pails and the silver hair cascading over the woman’s shoulders. Like all the visions I’ve had since, this one was more real than a movie. It was a world coming alive inside me. Or better yet, I was coming alive inside this other world.

The woman never looked at me directly. Nor did she speak a single word. But I heard something. She called to me. It was a calling that reached deep into my heart. I knew, without question, that I would follow the woman. Wherever she led.

I had no idea how far we would go. That she -- Audrey X -- would lead me deep into the maple tree forest. And into a landscape that I would come to know so well that I could draw maps. Name roads. See fences and grass, shadows playing on trees and snowy pastures. I would come to know the old woman, too, and all her relatives and friends. I would go so far as to invite them to my fortieth birthday party. And to the party I threw when I passed my doctoral exams.

You see, the old woman was responsible for me getting a Ph.D.

For six months after she first appeared in the woods that cold February afternoon, though, she led me absolutely nowhere. Busy with my children and a part-time job, I stopped thinking about her. Figured she had disappeared for good.

Until. That hot July Saturday. 1991. My children were playing in the yard. All of a sudden, I glanced out to the road. There, flying by, was a motorcycle. A young man drove and on the back was a young woman. Her belly was a dense sack jammed up against her boyfriend’s jacket. The young woman, I realized in horror, was nine months pregnant and just about to give birth.

I gasped. Pointed. What was that?

Another vision. But why? Why would a young woman decide to ride a motorcycle on the day she was having a baby? And was she related to the old woman in the woods? It seemed impossible. It seemed like the two visions had nothing to do with each other.

Except. A few weeks later, the third vision linked the first two. I saw the same young woman from the motorcycle lay her baby in the woods. In the same maple tree forest where the old woman had walked, carrying the pails.

I wasn’t sure what it all meant. I had no idea why I was being selected to have these vivid, very vivid, visions.

But I knew one thing. I was compelled to start writing.

Something. Something that I would soon begin calling “The Long Thing I’m Writing.”

It would take me nearly a year to work up the courage to call my literary zygote “my first novel." 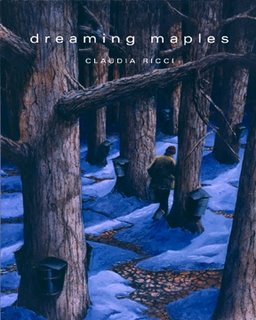 It would take five years to write, and three more years to revise and revise.

All in all, it would be a decade before the book was ready to appear in the world. By the time the book was published, my three kids were getting mighty big. Indeed, my two daughters, Jocelyn and Lindsay, both read the book and gave me great feedback.
I saved the three-page typed letter that Lindsay, then 15 years old, wrote to me on Mother's Day in 2002, reflecting on the book. What she wrote brought me to tears:
"I am honored to be the daughter of an author with such an amazing talent. Reading your book, I feel that I know you, my mother, better than I ever have. I feel that I understand you, I feel more love for you than ever."
There has never been a reader reaction that I valued more.
This is birthday week for my first novel, Dreaming Maples. April 6, 2002. I invite you to read the Prologue and Chapter One. To meet the wonderful character, Audrey X, who led me through the forest of my first book! I want to thank my cousin, Pat Rotondo, for the extraordinary piece of art that she painted just for the book. The story of that painting, and its connection to 9/11, is one for another day!
Posted by Claudia R at Friday, April 08, 2011

Hi, Thanks, Claudia, for sharing your process which is so interesting to see how it unfolded for you. Your connectedness with your first experiences are still blooming inside of you.....powerful , beautiful, and inspiring. best, Cindy

A really wonderful piece. Thanks for putting this up. Oh. And happy 9th birthday to Dreaming Maples!

Claudia,
I love reading a reminder of how this story came to be. You had told me the story a while ago, but it is worth reading again.

Dreaming Maples remains one of my all time favorite books. I remember fondly reading it and having a chance to email you my reactions as I went along. I came to love those characters, and was sorry to finish the book. I just took it back out and found copies of the emails I sent you wedged inside. Here is one thing I wrote as I came to the end of the story:

" I feel very energized by the ending, it was a couple of tough reading days dealing with the Candace situation. You're right, I didn't need to be afraid of the outcome. I'm really happy for Candace and baby Grace, (and Audrey and Marjory and Eileen and Rusty...)I am so hoping for a sequel, perhaps Audrey will speak to you in your dreams.) :)

I will be thinking of you and Dreaming Maples as I head out for my morning walk to visit the forest.

I love the story of how you came to 'meet' these characters here! Gonna have to read it now! Cheers!

I love this story, so incredible.