Why I'm Happy I Live With My Cat 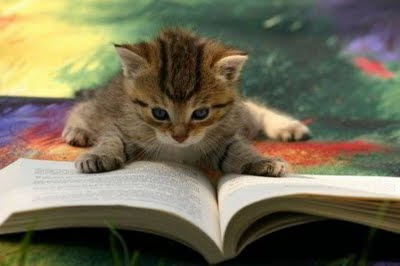 There is nothing better than curling up with a good book; preferably a good thriller.

After a long day of work I like to kick off my shoes, put on my PJs and prepare for my own reading time. I go into the kitchen, grab my bottle of pinot noir, pour a hearty glass, feed the cat and plop down on my couch. I take a minute to let myself sink down into the multi-colored micro pillows, reach over and grab my fleece blanket and release a sigh of contentment. I open up my dog-eared copy of Hearts in Atlantis and enjoy the smell of library. It’s time to let Mr. King take me away to his version of Maine. But in this perfect moment, there is a distraction.

The next-door neighbors. I’ve never had a problem with them before, I mean the occasional tremble of their surround sound, sometimes a little smell of skunk from underneath their door, but they are usually good neighbors. Lately, the last couple days, have apparently been rough. Lots of yelling, screaming, I can hear the girl start sobbing sometimes.

“Maybe we are just in different states of our life, I’ve done my partying and going out and all that junk, and I’m over that I need stability.”

“I don’t understand how me going out with my friends isn’t stable enough for you?"

“Because, you will be out all the time. If you’re not together seeing your friends five times a week it’s the end of the world.”

“I'm not out all the time; I just want to know that if I get a phone call at 11 p.m. and I want to go out for drinks, it wouldn’t be a problem. There is no reason I can’t have friends.”

Ugh, even Stephen King can’t drown out their arguing. I gulp my wine; maybe I should just go to bed.

“You SAY that I can do whatever I want, but if I actually did it you would be pissed when I got home.”

“Well why do you think that is, huh? You go out, but never let me know where you are or what the plan is. All I want is to know when you’re coming home, that’s it. You’re the most difficult person I’ve ever known.”

“You want to know how I fucking feel? I don’t fucking trust you. Ya, sit on that for a while.”

Well that seems harsh I think. Though apparently the girl doesn’t have the common courtesy to say where she is going.

“I don’t trust you, you never tell me shit. You say you will be home in an hour and roll in the door three hours later. No text, nothing! You could have been in a car crash! And I would never have known! I would have gotten a phone call in the morning saying you were dead! I don’t want that phone call!”

The girl is crying still, and doesn’t respond; but the boy makes a good argument. She seems kind of like a bitch. I go to take a sip of my wine and notice it’s empty, so I go into the kitchen to pour some more.

“What do I have to do?” the girl wails now. “I’ve spent three years making it up to you! Three years! I let you keep me on a short leash, I never go out with my friends, I call you and update you about my where abouts all the time. All I want is some freedom! I don’t want to feel guilty about having friends!”

“You can have friends! I just want to know where you are and who you are with, and when I don’t hear back from you I get worried!”

“No, you yell, if I don’t text you back right away you yell and scream at me!”

Wow, the acoustics are much better in the kitchen. I pull out a kitchen chair and sip my wine. My book is lying abandoned on the couch and now I see Jasmine playing with the book. So cute, my kitty.

But the argument pulls me back.

I move closer to the wall.

Hmmm, Now I feel bad for the girl, I wonder what she did to make him so mad, but if it’s been years since that maybe he needs to let it go.

“You don’t want that, you don’t want me to tell you every time I think about how you betrayed me, and how you hurt me and how much it still hurts. I would lose it, I would blow up. I tried that once with my ex. She locked herself in the bathroom for a half an hour and I screamed at her through the door. I don’t want to do that to you.”

Can we say anger issues? I guess at least he doesn’t displace it on the girl, if she is crying now…

“Well then what do you want to do?” she whispers.

“I don’t know, maybe we just shouldn’t be together until you grow up. I need stability and you want to be free and have no responsibility or report to anyone.”

“I shouldn’t have to report to anyone! I’m 22 not 45! I should be able to go out and not worry about my angry boyfriend being pissed for no reason!”

Wow, what a bitch! He can be an asshole it seems, but if they live together she should at least let him know if she is coming home. I’m suddenly glad I just live with my cat. I look over at Jasmine on the couch. She looks up at me and yawns. Her fat ripples as she flops over to lay on her other side. Yup, a cat is a good roommate. I wrap my blanket round me tighter and put my ear back to the wall.

“I know what I want in life, I want stability, I want someone who is happy with me and satisfied with me, and you just aren’t happy with just me.”

“No, I am, but I need my friends as well. That shouldn’t be unreasonable. I love you! I love my friends! I don’t understand why I can’t have both!”

“You can, in moderation. I’m done with the partying and staying out all night, I did that when I was young.”

Wow, they both make really good points, at first I was on the boy’s side, but then the girl had me convinced, but now I don’t know if there are sides.

“I just want to be with you and be happy.”

And then silence. I guess they are done for the night. It must be hard to be a couple like this, where there is such a big age difference.

They clearly care and love each other, but man that’s rough.

I look at the clock, and it’s almost midnight. My wine is gone, my neighbors are silent. I guess it’s time for bed.

Lori Walker, a junior at the University at Albany, State University of New York majoring in psychology, wrote this piece for the "Flip the Script" assignment in the Happiness class.
Posted by Claudia R at Monday, April 25, 2011