When Your Real Father is a Multi-Millionaire Who Refused to Acknowledge You!!!

Many times over the years I've known her, I've told my wonderful friend Nina Montepagani that her life story was deserving of at least one novel.

Now, her life story is spread across the front page of the Metro section of tomorrow's New York Times.

Nina -- whose real name is Sebastiana --is in the midst of a legal battle to establish that Dr. Sebastiano Raeli, an Italian physician who died a few years ago leaving behind an estate worth $100 million -- was her biological father. One of the photos that is part of the paternity lawsuit shows Nina's mother, Anna, with Raeli, who is holding Nina as a baby. 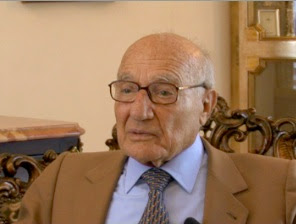 and his wife donated his entire estate to Tor Vergata University in Rome -- "the largest gift ever to an Italian college," according to the Times. "The announcement quoted Dr. Raeli as saying they had done the good deed 'because we don’t have children.'"

Well, so, not according to Nina. She has a very convincing tale to tell, along with photos and some incredible letters that Nina's mother, Anna, wrote to the doctor. According to the Times, "They were anguished, emotional, miserable. And they were written to a prosperous young Italian doctor named Sebastiano Raeli. 'If I would ever tell this story to someone, it would seem impossible to believe. It seems something out of a novel,' Anna Viola wrote to Sebastiano in 1957, when Nina (“beautiful child,” Anna wrote) was 5."

In another letter, Anna wrote: "How much pain I carry in my heart! How much humiliation."

Anna died of cervical cancer at the age of 35, just a couple of months after writing these letters.

Dr. Raeli was a gynecologist.

It isn't just the possibility that she stands to inherit some of Raeli's extraordinary estate that is prompting Nina to fight her long legal battle (the suit in New York City is an attempt to have her birth certificate changed; it currently shows her father to be Giuseppe Viola, the man who was married to her mother and who raised her.)

For Nina, this is a fight for her own validation, for her own legitimacy. As the article notes, it's Nina's right to say publicly, “I exist. I am.”

Nina -- whose daughter Julia grew up as a close friend with my daughter Jocelyn -- helped inspire my book, Sister Mysteries. It is in part because of Nina, and her triumph over breast cancer, that I started writing the book.

My dear Nina, may you triumph in your lawsuit, but meanwhile, you have already triumphed -- here, today, in having the world know your incredible story!
Posted by Claudia R at Saturday, April 16, 2011

I remember Nina very well from our college years and a little beyond. I wish her all the luck in the world as she continues her pursuit to uncover the truth about her ancestry. I hope she finds peace when all is said and done. Fondest regards to Nina from my Mom and Dad. I think of her often!