Note to readers: Students writing "Flip the Script" stories have found ways to turn their original narratives into more redemptive tales by telling the story from another point of view. Jamie Gibbons' first story, "Dead Flowers," which appeared in MyStoryLives on April 9, tells her version of her grandfather's death. Here is the way she flipped it around.
By Jamie Gibbons

My wife and I had our first child in 1957. By 1971, we had nine children running around our house. Things were different then. It was acceptable to spank my kids for acting out, and I was not the only father back then who never directly said “I love you.” I just assumed that my kids 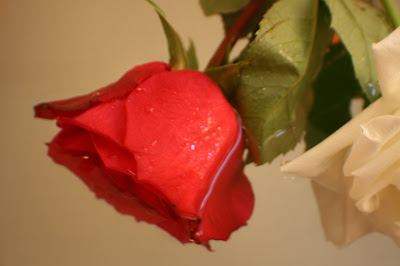 already knew. Sometimes though, thinking back, I wish I could have been able to say it, before it was too late.

My son Danny’s personality is most similar to my own. I think that’s why we always got along so well. It also helps that he is one hell of a golfer, since I loved to play so much. He could win any tournament that he entered, no matter who he played. I felt so honored when he chose an old man like me to be his partner. Danny’s got a lot to be proud of besides golf. He has two beautiful daughters, a wonderful wife, and a very nice job and house. Because of the time period, I never said it, but I was always extremely proud of him. Both his daughters are special girls, but his oldest daughter, Megan, showed me more and more as she grew up that she had our personality as well. The first day that she made a sarcastic joke towards me, I knew I would have a strong connection with her.

I love my granddaughter very much. Parents these days tell their children every day how much they love them, right to their face. I still was not that comfortable doing that, but I found myself wanting to let people know, as I got older, without exactly saying it. When Megan turned eighteen, I wanted to show her how important she was to me. I think I surprised everyone when I had a dozen red roses delivered to her house that day. I knew that she liked them because the next day she made one of her usual surprise visits where she makes my wife and me lunch and spends the day with us.

I used to love watching Megan play sports. Every time she had a game near my house I always made it a point to go watch. She was one of the best volleyball players I had ever seen and the passion that she played with made me so proud to think a part of me was in her.

I had been sick for a while, but what usually happened was that I have would surgery and everything would be good again, for a while. But during Megan’s senior year, it got worse. My biggest regret is that I missed her games that year.

I went into the hospital around Christmas time. The doctors informed me that my next surgery was the biggest one I would have, and that when it was finished, they would need to keep me “under” to make sure that the infection did not come back. Before the surgery, every day at five o’clock, when sports got out, Megan would be there to visit me. She would also come on weekends, even though I told her that she should just stay home and hang out with her friends. She would always smile and say the same thing though, “I wouldn’t want to be anywhere else but here right now.”

I woke up from my surgery and was shocked when I realized that three weeks had gone by. I had missed Christmas and New Years Day. That took me a little bit of time to get used to. But the first thing I saw when I woke up was Megan. My wife told me that even when I was “under,” Megan continued to come every day and on weekends to sit with her and talk to me. I think I realized at that moment that there was a God, and he knew exactly what he was doing by giving me a granddaughter like Megan.

I had to stay in the hospital for months, and there never seemed to be a day in the future that I was going to be able to go home. I wanted to go home so badly, but it seemed as if every day brought a new problem. The doctors had to work their magic, and keep me OK for the moment. Finally the month of June came around. Megan was very excited about her senior prom and graduation. Every day that she came, she kept me updated on her plans for the prom and the graduation party she was going to have. She said she had a seat saved for me right next to her, at her table, at the party. She told me that I better get healthy soon so that she didn’t have to sit at the table by herself.

One day that she was visiting, Megan stayed later than she usually did. She just talked to me for hours and hours on end. When she left that night, even though she knew how uncomfortable I was showing emotion, she hugged me tight, kissed my forehead, and told me that she loved me. I wanted to say it back, but I got too choked up to speak. I know she knew what I wanted to say to her because when she saw the tear in my eye, she smiled and simply said “I know.”

After she left that night, it was just my wife and me watching television, and I started to feel a little weird. I could not tell what it was, but I knew something wasn’t right. After a nurse checked me out and said that nothing was wrong, I knew what was happening. This was it, I was dying. My wife knew it too, and we said that we loved each other while she held my hand. I was angry that God was really going to take me away during such an important time in Megan’s life. But then I remembered the moment I had with her earlier. She knew I wanted to be there, and how I felt. I didn’t want to go, but I had to. I knew I didn’t have any unfinished business now. With one last breath, I closed my eyes.

Jamie Gibbons, a sophomore at the University at Albany, SUNY, is majoring in English and minoring in psychology.