Can Anyone Resist the Royal Wedding?

It's been a big question the last few days: are you getting up for the wedding?

And yet, in the last few days I started thinking about an old newspaper clipping.

What had I written on that hot summer day back in July of 1981 when I was a young reporter for the Chicago Sun-Times and I got up at some ungodly hour to help cover Diana and Charles' wedding? 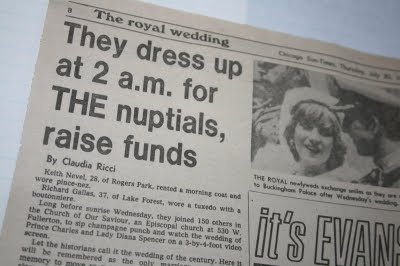 Yesterday, I found myself in the back of the garage, searching through a couple of boxes. Nothing turned up there. I came away thinking I must have thrown those old clippings out. They are after all three decades old.

The first thing on my mind was the wedding. I slipped out of bed and went downstairs to the den and turned on the TV. Silly me, I thought, but without any apology, I couldn't resist. I too joined the millions of wedding watchers.

As the service was coming to a close in Westminster Abbey, and Kate and William were coming down that long red-carpeted aisle, it hit me.

I remembered that other box I hadn't searched through, up in the third-floor attic. The box was a bit of a mess: mice had chewed through the corners of the clippings. And the box was filled with fragments of roofing tile (we got a new roof in 2007).

I was about to give up. And then I found the "miscellaneous" file at the bottom. Inside was the Sun-Times clipping. The story of all those Chicago foks who got up in the middle of the night to watch what we called "the wedding of the century." As I wrote that day, "Here it will be remembered as the only marriage ceremony in memory to move so many people to give up a good night's sleep."

The woman I quoted -- one of many who sipped champagne while watching -- said the obvious: "I suppose you could just as easily watch the reruns at 8 o'clock in the morning...but it's not nearly as much fun."

Some 150 people gathered at the Episcopal church that day -- the wedding of Diana and Charles served in part to raise funds to restore the church's parish hall. Some of the attendees rented morning coats or tuxedos for the event.

But in the end, the pre-dawn TV party way back in Chicago on July 30, 1981, was much like the celebrations this morning, where millions (or is it billions?) are glued to television sets (and now, of course, computers and cell phones) all around the world, to watch another "wedding of the century."

We can't help reveling in the glamor of royalty. We can't help our collective fascination with fairy-tale weddings. (My very favorite moment this morning: a glowing William leaning over and whispering to his soon-to-be wife something on the order of, "you look incredible!" That smile and the look in his eyes brought me back to my own wedding day.) 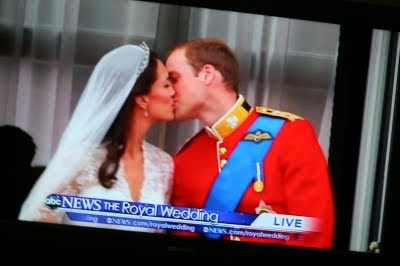 Well that's not true exactly. Some things do change.

Thanks to Kate and William's wedding, I am cleaning out those old clippings from the attic.
Posted by Claudia R at Friday, April 29, 2011