"Two Girls by the Side of the Road"

Miriam Rathskeller held a creased piece of paper up to the weak sun. It bore the name “Rivka Zladistoya,” the girl she was supposed to walk home. Miriam turned the name over and over in her mind, the way her fifth grade teacher had pronounced it earlier, with rolling sibilants, and a pause between first name and patronymic: Rivka, Zladistoya.

It was like thick honey. Rivka had come into the classroom towards the end of final period that day 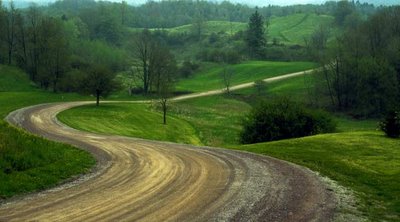 escorted by the gaunt, tired principal who said that Rivka was an example of glastnost, or peace.

"Da—yes. Nyet—no," Rivka had said, proudly, standing like a little soldier, a missionary for peace. Miriam had thought, finally, someone to end the petty infighting, the cliques.

Miriam used to have friends--in first and second grades. But it seemed everyone had turned on her. Her mother liked to say it was hormones, preadolescence. But Miriam didn't know. Just last week, Miriam had to go to the bathroom and Sheila purposely made her wait, not flushing so that finally, when Miriam got inside the stall, she was forced to flush Sheila's poop and pee herself. And Brian, with his stringy body and snot; he was always trying to hand Miriam dirty kleenex or to tell her nasty things. Things like this made her burn inside, because she knew she wasn't meant for such mistreatment, but she didn't know what to do about it.

Miriam rocked up and back on her feet, her heavy body a comfort around her while she waited. She sometimes stuck her hand inside her shirt or her pants and squeezed a roll of flesh, enjoying the supple way it sprung back into place. It was late winter and the gritty wind caused her eyes to tear, so she allowed her dirty-blond hair to blow over her face and protect her. She was a solid, stubbornly built girl whose fierce gaze was beginning to crystallize into that of a young woman used to looking through things as though they were air. If she looked hard enough, maybe some better truth would appear on the other side.

Finally Rivka appeared, a small, neat grey mouse with short brown hair in a blunt bob. Miriam marveled at how different Rivka's book bag—navy, with leather straps—looked, like something out of an old movie. Even the stitching, thick and brown, looked foreign. Miriam fantasized that she and Rivka would become best friends and then Miriam would be an honorary Russian, she’d be given a Russian book bag, and people wouldn’t tease her for being different because she’d have the excuse that she was from another country.

Meisha Rosenberg is a writer and teacher living in Troy, New York. She holds an MFA from New York University. "Two Girls by the Side of the Road" is part of a short story.
Posted by Claudia R at Tuesday, July 11, 2006

"[P]eople wouldn’t tease her for being different because she’d have the excuse that she was from another country." That's really, really good. I wish I had written that.

Hi David, I agree with you -- it is lines like this that make you go. AHHHHHH, such a wonder, this thing we call writing! Meisha, I hope we will get to read more (or all?) of this story sometime! Claudia Ricci