How Ironic: On Martin Luther King Weekend, Jews are Reading About Escaping Egypt through the Red Sea! 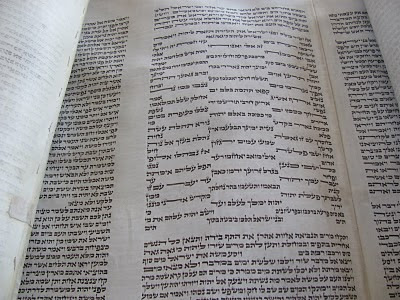 -- See How Today's Torah Portion LOOKS like Waves in the Sea!--

Maybe you've never seen the Torah before. The Torah -- which is the first five chapters of the Old Testament of the Bible -- is the central and most sacred text in Jewish worship. Here is what today's portion of the Torah looks like. Unlike most of the Torah, which is written in blocks or long paragraphs, this particular portion, called "The Song of the Sea," has a very very special shape and significance.

See how the lines resemble waves?

This is the very very famous portion of the Bible, the story taken from the Book of Exodus where the enslaved Israelites manage to flee from Egypt through the Red Sea. The story is a metaphor for peoples everywhere seeking freedom from slavery -- and not just the slavery imposed on people by others.

Sometimes we are enslaved by our own impulses and desires, our addictions, our limited views of ourselves and our capabilities, our hatred and our biases and prejudice.

In the Red Sea story, the Egyptian Pharoah first lets the Jews go, but then he changes his mind and sends his chariots and soldiers to chase after the fleeing Israelites.

Moses, guided by the hand and words of God, leads the Jews triumphantly through the Red Sea 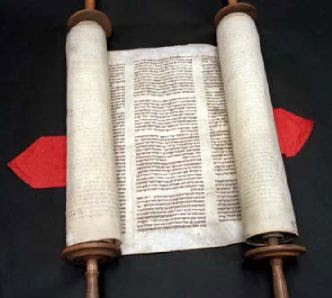 (or the Sea of Reeds, depending on the Hebrew translation.) The waters part, and the Jews manage to get through the sea, but Pharoah's troops get swallowed up by the ocean. This particular portion of the Bible is written as a poem (only one other portion of the Torah is written in poem form.)

"The Song of the Sea" is relayed in a call and response fashion; the verses, like ocean waves, move back and forth in time.

At this morning's services, we learned that the last line of the poem, which you can see here, has a very special structure:

On the left-hand side is the Hebrew word, pronounced "hayom," which translates as "the Sea."

On the right-hand side of the line is the very same word, hayom, again, for "the Sea."

Immediately following this passage is another famous story, where Miriam, Moses' sister, dances with her hand drum and sings a victory song.

After Alan Kaufman, a member of our temple (Hevreh of Southern Berkshire in Great Barrington, Massachusetts) chanted "The Song of the Sea" -- Alan did a beautiful job, as he always does chanting Torah -- we spent some time discussing the passage. My husband, Richard Kirsch, a political activist, pointed out that the Jews fleeing through the Red Sea in his mind represents was one of the first examples in history of civil disobedience.

Indeed, earlier in the service, we had read a prayer by a Rabbi who invoked the Red Sea image in a speech about Dr. Martin Luther King's civil rights marches in the South during the 1960s.

On a weekend when we are remembering and honoring Dr. King, it is ironic, but so fitting, that "The Song of the Sea" should be the Bible passage that comes up as the one that we would read. Songs have, throughout the ages, proved so central in the lives of people engaged in rebellion.

What amazes me is how the composer of the Torah, whoever that may have been, would think to turn this very special passage into poetry, and not only that, would make it what we in the literary field would today call a SHAPED POEM.

As we always say on Shabbat --

"Shabat Shalom," may you have a very peaceful day!
Posted by Claudia R at Saturday, January 15, 2011